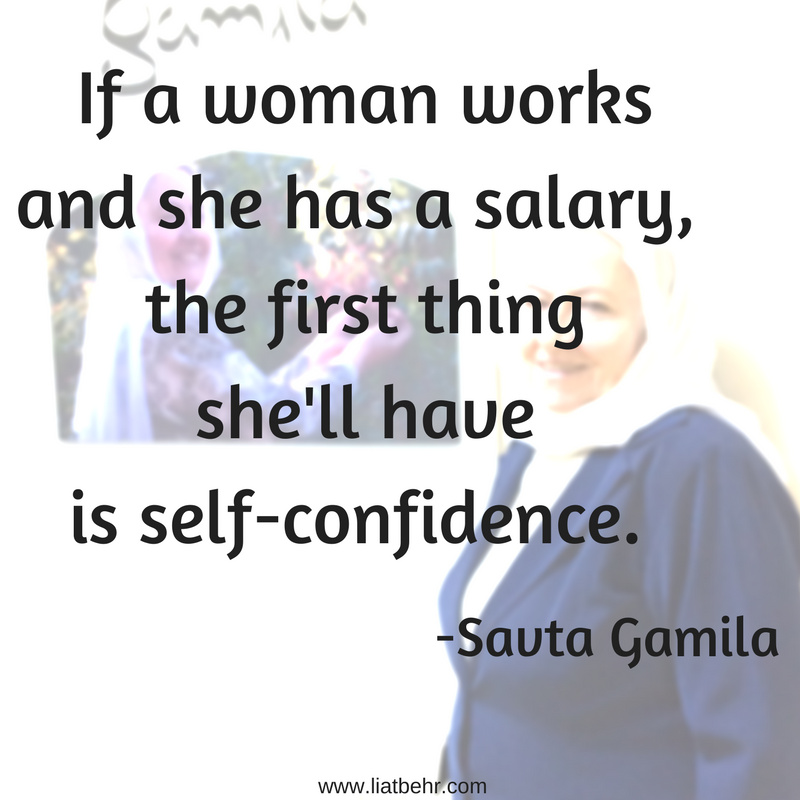 Savta Gamila, renowned internationally as a great Israeli soap-maker that bears her name, and winner of 2017’s Jasmine Award, needs no introduction. Her contributions to society go well beyond just making soap. Her hardships, values and entrepreneurial spirit have influenced her success as well her drive to empower Israeli women.

The legendary Savta Gamila grew up in the rural hills of the Galilee. Having only studied in school until grade two, she was educated by her parents and grandparents in the oral tradition of nature. Her economic adversity and strong will led her to work towards a better life for herself and her family. But beyond Savta Gamila’s personal struggle for a better life, was a desire to create a better community, one that would promote both women empowerment and peace. I met up with Savta Gamila at the Gamila Secret factory in Tefen Industrial Park in the Galilee.

It’s all about the stories that we tell ourselves

It can’t be and shouldn’t be taken for granted that Savta Gamila is an observant Druze woman who was born and raised in a traditional Druze society where ancient laws and customs are observed. It is a society in which women were once not allowed to work. In fact, a working woman was a disgrace to her family for which she paid the price with mockery and humiliation.

Savta Gamila endured mockery and humiliation from her community in addition to the challenges her experiments raised: “I had a problem finding out what temperature each plant needs, how to know if the roots and leaves are good [and] how to combine plants together.” Despite countless failures, Savta Gamila never gave up. In fact, she never even came close to breaking; the thought never entering her mind.

I asked her how it was possible to endure it all.

Savta Gamila had a few replies for me:

Savta Gamila’s strong will combined with her belief of success, enabled her to endure both failure and contempt. I don’t know if one can change aspects of their character, but one can certainly change their own narrative. And this is perhaps one of the reasons that stories are so important – especially the ones we tell ourselves – they can determine our successes and our failures.

When Being a Good Person Is Above All Else

Even after Gamila Secret was an established and profitable company, it encountered financial difficulties for a period of about three or four years.  Things were so difficult that Savta Gamila had a hard time paying employee salaries. She made a decision not to fire any employees and instead take loans and  temporarily live off her pension. In other words, Savta Gamila did not pay herself or her senior management (her sons who are an active part of the company). She stayed loyal to her employees, women who had been with the company for over a decade. And though times were difficult, products were constantly in demand. “Whoever tries the product is always looking for it and wants it…our value was kept because our products are good.” It never occurred to Savta Gamila not to pay her employees – because that’s what her values dictated. She had built a company the way she wanted to, she employed women – Druze, Muslim, Christian and Jews and she was going to keep it that way, even if it hurt it financially.

“Why do I employ women…did they tell you that I employ four ethnic groups?” Savta Gamila asks me.

“If a woman works and she has a salary, the first thing she’ll have is self-confidence that she works and gets a salary. She’ll be able to help her husband with the children’s education. One salary today isn’t enough to support a family. So if a woman helps, it’s very important and she’ll help her family and they’ll educate children and they’ll live with dignity. That’s why I employ women….”

Later, during my tour of the factory, Jamal Muhanna, Savta Gamila’s Marketing Director and my wonderful tour guide, takes me to a room where women sit and use a knife to pare down each bar of soap and stamp it.

“You don’t think about getting a machine to do this?” I ask. Every business owner understands the importance of cutting costs. Savta Gamila is no exception. Jamal tells me about the falafel restaurant Savta Gamila owned in Peki’in between 1973-1975. At that point in time, in order to cut the expensive cost of chickpeas (from which humus is made), Savta Gamila planted  six dunams of chickpeas.

But for Savta Gamila, making her unique soap is different than running a restaurant. And that’s why she would never consider buying a machine that would reduce her womanpower.

Fuad, Savta Gamila’s son, who I was fortunate to meet on his visit from Holland explains  it to me “we believe we are doing something bigger than us…we can have a machine to do this job, but Gamila wants in each piece of soap to give her love.” That love clearly comes across – the love of nature, the love of women, the love of humanity.

Fuad went on to tell me that years ago, he had asked his mother, Savta Gamila, what business direction is important for her. She replied, “it’s so important for me that we have women, that we give them respect, that we help these women for their children’s education.”

Today, Fuad is a member of Friends of Haifa University, and is helping Druze students to integrate, assisting them with entrepreneurship and the ability to succeed.

It is with clear and focused intent that Savta Gamila employs women from four ethnic groups in her factory. It’s important to her to deliver a message through her work.

“We didn’t ask G-d or choose to be born into our ethnic groups. G-d chose [our ethnic groups] for each of us. It’s our obligation to treat each other with respect, love, a good heart, so that we’ll be able to continue our lives in our small country without any problems. That’s why I employ four ethnic groups. Look, in the entire world there’s no nation that’s perfect. There’s no nation that’s all bad or all good. In a family, there’s a mother and a father, there’s a child that becomes a drug addict, there’s another one that becomes a psychologist or a doctor. In a home and family that has many children, not all of them have the same character. Not all are good. Not all are bad. That’s how the world is. We don’t need to look at the black. Look at the pretty flower. At the good flower….If you wouldn’t sit right now with Savta Gamila, you wouldn’t know Gamila’s story. You might know it from far away. But if you get closer, and I get closer and we get to know each other from close, each person can know what’s good in the other person, what’s bad in us, that’s why we need to live together. Whoever wants to know what the value of peace is, what the value of working together, should come to us. We are an example of peace.” I’m so grateful to Savta Gamila, Jamal, Fuad and Amira for their warm welcome and for spending time with me and teaching me about themselves, their soap and their business. You can learn more about Savta Gamila and order soap in Israel, the US, or  internationally.