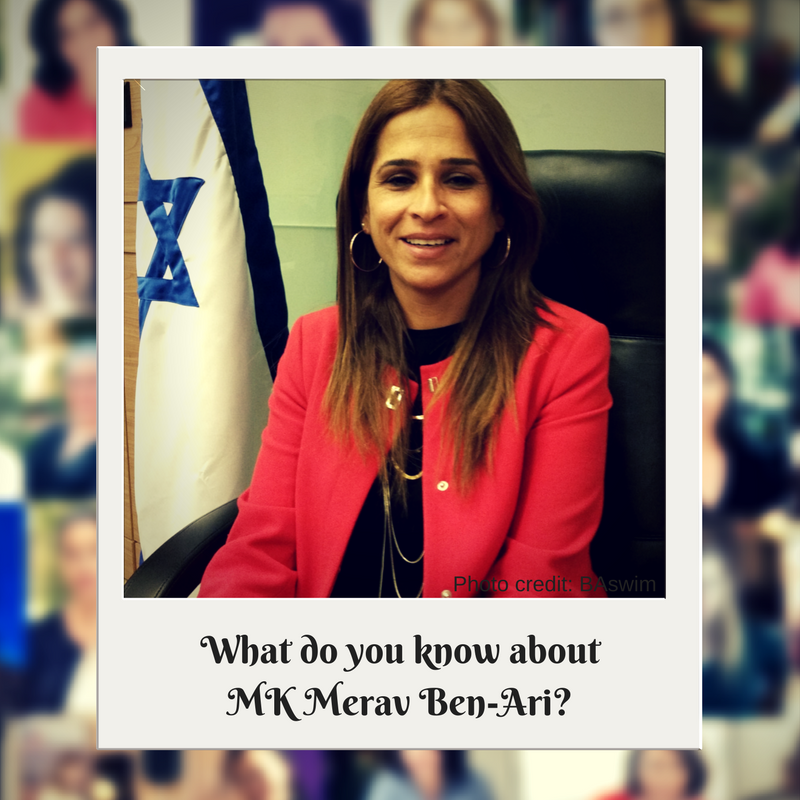 From being raised by a single mother and all through her journey to the Kulanu party and the Knesset, Merav Ben-Ari hasn’t forgotten her humble beginnings. As she works toward helping businesses prosper, she works equally hard towards empowering single mothers and at-risk youth.

I met with MK Merav Ben-Ari in the Knesset and in this post I share 5 things about her that you probably didn’t know:

1. She was on the Israel’s reality TV program “Needed: a Leader.” And she won.

In 2005, when Merav Ben-Ari first interviewed for “Needed: a Leader,” she

was relatively unknown and didn’t in fact pass the first audition, having come

exhausted after a difficult day at work. But being the overachiever she is, she

couldn’t in fact accept that she failed at something and asked to be interviewed again.

2. She’s on the board of the Knesset Speakers Quality of Life Prize

own opportunities, Merav Ben-Ari understands the importance of organizations

that provide people with opportunities. It’s no wonder that in 2016, she

recommended that Jasmine receive the 2016 Knesset Speakers Quality of Life

3. Motherhood taught her a lot about priorities

At 42 years old, MK Merav Ben-Ari is a veteran of overcoming challenges. And

as she learned very quickly, the path to motherhood as well as motherhood itself

has its own unique set of challenges. But motherhood is also an excellent

teacher. As such, motherhood has taught MK Merav Ben-Ari priorities as well as

the importance of taking everything in stride. Before becoming a mother, work

“Until I had a daughter, I thought that the most important thing in life, is work. But

motherhood taught me otherwise; that there’s no black and white and that you

need to be able to take everything in proportion.”

4. Being chairperson of the Blue and White Lobby and advocating for single mothers is complicated

There’s no one sector that MK Merav Ben-Ari works to promote. She’s takes a holistic approach, as she believes both in the importance of growth of the Israeli industry as well as in the empowerment of single mothers. But this, at times, is misunderstood.

“…sometimes when I give preference to the Israeli industry, people come and say, ‘you prefer industry over other values. And it’s not true. Because if I help a factory, there will be education, and welfare and jobs and the country will have money.”

5. She doesn’t dwell on failure

MK Merav Ben-Ari knows a lot about failure; whether in childhood, the army and even later in life. There’s no one failure that that she feels eventually led her to success, but rather is of the opinion that

“life is made up of failures; there are a many failures, but the main thing is to keep going and not get stuck in failure.”

I’m grateful to MK Merav Ben-Ari for devoting some of her time to share some of her experience and insight into understanding success and failure.