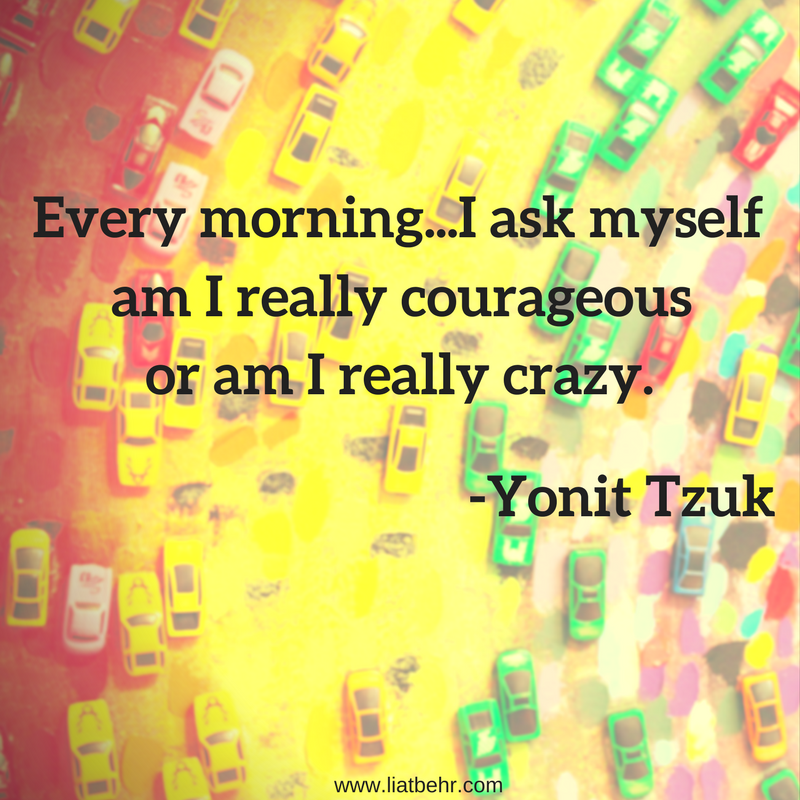 Meet the blog researcher who developed a 5-step model that explains how a person can turn a blog hobby into a blog profession and then did just that, going on to build a home for Israeli bloggers.

Yonit Tzuk, also known as the Blogeristit, talks about what it means to be vulnerable and how she pushed beyond it to build the Hubblogging in Kfar Saba. In our interview, Yonit generously shares her experience about building the hub and how she secured a bank loan in the face of rejection.

For Yonit Tzuk, blogging began with a desire to share, as well as learn. While abroad for her husband’s work, Yonit began sharing her daily experiences with her newborn daughter. First out of a place of loneliness, but quickly developing into a place where Yonit felt she had to write in order to learn what works and what doesn’t and better develop her content marketing muscles.

Upon her return to Israel, Yonit did a Masters in Media Communications in Netanya Academic College through which she developed her 5-stage model for turning a hobby into a paying blogging profession.

In retrospect, that 5-stage model Yonit developed, was in fact her own path in which she went from a hobby about blogging about her own experiences with a newborn to a paying blogging profession and building a blogging hub for aspiring hobby bloggers and blogger professionals.

According to Yonit, support is vital to success. And while the significant and ongoing support of family and friends is crucial, it wasn’t enough to keep Yonit from feeling vulnerable and completely exposed as she continued to develop her business.

Further, as Yonit’s idea of building a blogging hub developed, her fears and anxieties grew. At one point, Yonit developed nervous ticks which only disappeared after Yonit developed the connection between four concepts, illusion-presence-home-incubator, and realized with absolute certainty that her ideas about blogging and the people she worked hard to nurture in their blogging quest, need a home.

“Our entire life is a fucking illusion,” says Yonit, “it’s as if in order to say [that something] is ‘no problem’, you have to work hard and not be scared…and that caused me to feel really exposed…and now I understood that I need to be present, it’s true that everything is an illusion, but I have to do everything…I need something that defines me.”

“Home is where the heart is,” is one of the quotes that can be found in the blogging hub.

“There’s nothing stronger than a home,” says Yonit; but not in the sense of your family and good friends. Home is your passion and your peers with whom you want to share that passion. And everybody needs a home. Even bloggers.

And here is where it all comes together for Yonit. That understanding that her presence and her passion are need to build a home for bloggers. A home that will serve not only as a safe place where bloggers can come meet, talk, learn and share ideas. But where they can also grow. Like in an incubator.

Want a loan? Don’t take no as an answer.

If you want to succeed you need a team. This is another important lesson that comes out of our talk. Hire pros. Don’t be scared to shell out money to people who will be committed to helping you.

Yonit’s team consists of a financial consultant, a mentor, and interior designer and a lawyer. Each one helped her to lift her Hubblogging project off the ground.

Yonit planned out the financial aspect of the hub with her financial consultant. Together, they concluded that Yonit needed 100,000NIS to set up the hub. But Yonit didn’t have that type of money.

Yonit recognized she needed a loan, and for the first time in her professional career she set out to request her first bank loan.

Except that the bank wouldn’t give it to her. So Yonit did the only thing she could.

She asserted herself and gave a pitch that shamed them into giving her a loan.

Yonit pointed out that she’s been in business for almost 5 years and has never asked them for a shekel. She told them that she built her business with her own ten fingers and that in 5 years, it’s only grown. She told them them that her business is in fact a community, and that it provides a solution to the blogging community and to independent women. And she told them, that it would be a complete disgrace if the bank didn’t support her initiative.

When it came time to buying chairs for the hub, Yonit’s credit card was declined. She called up the bank. She explained to them that she had asked for 100,000NIS for a reason. She was now short 20,000NIS and that the hub would not be able to open without chairs. Without chairs, she told them, the business would fail.

Yonit told them she wouldn’t get off the line until they approved another 20,000NIS.

So they approved it. Yonit had her chairs and the hub opened on schedule.

And still, everyday, on Yonit’s 7 minute commute to work, she still asks herself

I’m grateful to Yonit Tzuk for devoting her time and being so open about her experiences and insights into building her business. You can learn more about Yonit Tzuk on at the Blogeristit and at Hubblogging.

1. How do you define blogging success?

“Each blog defines what success means…for me success isn’t measured by traffic. Success is that people enter my blog and that I manage to motivate them to action. Success is that I get an email ‘I read your blog all night.’”

“From my father. My father is a very very special person. And he always tells me, ‘if you really really believe in it, then go for it.’” She Means Business – “The book is amazing. Because it is about a strong woman who built her online community. And her entire story and so on. I read it and I listened to it…on Audible.” They Ask You Answer  – “A book that completely changed my content marketing strategy….He was a salesman at River Pools, a company that sells swimming pools. In 2008, with they financial crisis, they fell and he [Marcus Sheridan, the author] asked himself what he’s going to do. So he sat at the kitchen table and he wrote down 100 questions that his customers always asked him and he simply started asking all the questions on his website. And that brough sales and people…His story really resonated with me. No bullshit. No marketing. Be authentic. Answer clients. I built the Blogeristit according to his model. It’s a model that works.” The New Entrepreneurz – “On Yom Kippur I was stuck in my parents’ house with this book….and look what happened.” Yonit shows me her copy of the books, full of Post-It notes. “This guy, Ronen Gafni has a FreshBiz game strategy for businesses….I understood that he uses games as a platform. I use the blog as a platform…I took notes – this is what he says, but here’s how it can use used in the blog. It’s a cool book.”