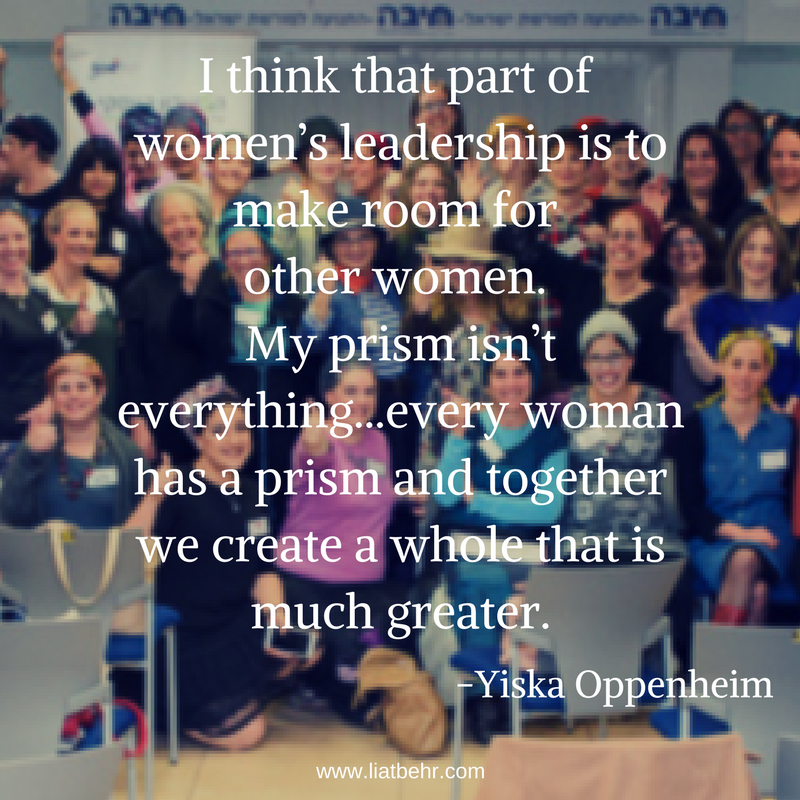 What makes a hard-core religious kibbutznik leave the kibbutz to become the director of an all-women religious business club?

Yiska Oppenheim, left the kibbutz way of life to become a successful marketing strategist. She is behind the popular Israeli Facebook group Datiot Iskiot Medabrot [Religious Businesswomen Speak Out] and the director of Emunah Jerusalem’s Business Club. I met up with her to discuss her journey from kibbutz life to city life and the impact she’s having on religious female business owners.

The Kibbutz  –  a source of tension and growth

Yiska is second-generation kibbutz born. Her four grandparents made aliyah to the kibbutz from Italy.

But for Yiska, kibbutz life was complex.

“On the one hand it’s a wonderful place full of nature, values and social ideologies. And I have a lot of positive experiences from there. On the other hand, complex memories are etched in my mind.”

Those memories include losing the traditional family structure and its security as well as the difficult challenge of creating a separate and independent identity from that of the kibbutz.

Yiska is articulate about her ideological issues with the kibbutz.  One of the core values with which she has difficulty is equality.

“There’s a gap between the real merits of kibbutz members and their actual contributions. The decision not to measure contributions of unique value through money, prevents competition, and the motivation to achieve more. Ultimately, it hinders excellence.”

Yiska’s experiences on the kibbutz were very conflicted. On the one hand, she wanted to be uniquely her and not part of a group. On the other hand, she longed to belong. It’s that tension that enabled her to grow to where she is today – helping companies and organizations create a unique marketing identity and to create a Facebook community that helps thousands of religious women.

Building Identity – your personal story is your brand identity

You could say that Yiska has a the Midas touch. She opted to skip university and enter the real world instead. Making her first monthly salary of 2,500NIS (approximately $675US) she felt she had raked it in. But she quickly moved up from filling boxes to marketing educational activities and from there to marketing democracy curricula to schools. She turned 20 schools with democracy curricula into 120 schools.

“When people want to find their identity, I tell them to define their pain in life. Not the pain of their business; the pain of their life, that every person has; then define their client, and then define their client’s pain. And you’ll see that it matches up. And it’s amazing. I think that the substance of our life is everything. That’s why I’m interested in identities. Even when you have a large business or a large brand – there’s always a deep identity. That’s what interests me in my work.”

Building a different type of kibbutz

Yiska was asked to participate in a target group being set up by Emunah in order to understand the needs of women business owners. Once they understood the need for such a group, they asked Yiska to direct it.

Six months after starting the business club, Yiska started the Facebook community – Religious Businesswomen Speak Out. The group started with four directors and now has six.

Ironically, Yiska left the kibbutz to start a different type of ‘kibbutz’  where religious women encourage each other to develop their unique voice. In this ‘kibbutz’ both the individual and the community are strengthened.

I ask Yiska if she ever felt that being a woman held her back.

“With every price quote that I send, I dread asking for more because I’m a woman. I always ask for less than they would pay a man.”

Yiska understands the tremendous value she brings to individuals and organizations. And yet, she refrains from asking for more. Because though she knows her value, her deep perceptions of herself travel with her everywhere she goes. We, as women, are not conditioned to exude confidence. Especially when it comes to money.

Religious women have an even bigger issue with money. We’re somehow raised to think that it conflicts with our value system.

“We have a ton of work to do about money….money is not a luxury, it’s a basic need. It’s air. Money is security and freedom, and it’s as important as oxygen.”

She tells me a story.

This past November the Religious Business Women Speak Facebook group held its third and largest offline conference. 500 women at Airport City. The subject of the conference was women and money. Malka Puterkovsky, a trailblazer in the national-religious world was invited to speak.

Yiska asked Malka to present her with a price quote for speaking at the conference. Malka replied, “pay me whatever you want.”

Yiska decided to walk the talk.

“You’re going to get the same amount as the most senior speaker. Because in my opinion, that’s saying something. Women need to know to get paid according to the value they bring.”

I’m so grateful to Yiska for her valuable time. I learned so much from this incredible woman and role model in the time we spent together for this interview. If you’re a Hebrew speaker you can join the conversation on Facebook or at Emunah’s Business Club.

During our long conversation, Yiska and I covered a lot of ground. Here is some more valuable information that came out of our talk.

1.  What was the best piece advice you ever received?

“You have to invest money in order to make money. First you invest and then you make money and not the opposite.”

2. What do you think about the concept of mentors?

3. What was your best investment in time, money or energy?

“The Facebook group Religious Business Women Speak – which is a totally voluntary enterprise. I invest a ton of time in it, totally voluntarily, but in hindsight there’s no other marketing activity that I need to do.”

4. What 3 books do you think every woman needs to read?

i. Lean In by Sheryl Sandberg

ii. The Fountainhead by Ayn Rand

iii. Women’s Bodies Women’s Wisdom by Christiane Northrup – “one of the best”

What does every woman need to know in order to succeed?