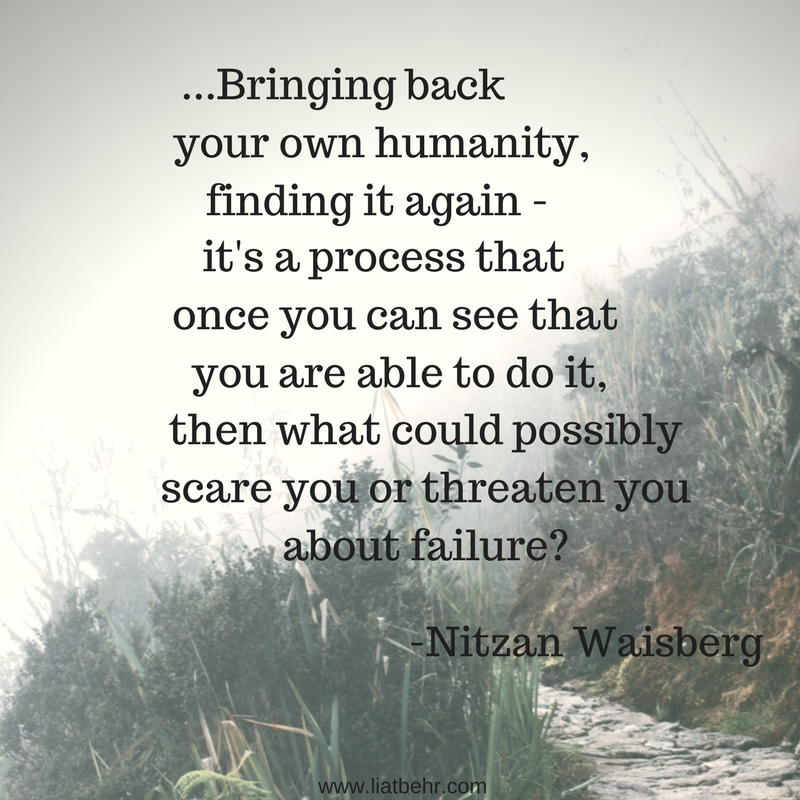 After teaching at Standord’s elite institution, Nitzan Waisberg has found it difficult and lonely to return to Israel and find her children’s education being hijacked by religious politics. Using Facebook and collaborating with friends and the Forum HaChiloni (English: The Secular Forum), Nitzan is helping restore her sense of belonging.

What the hell is design thinking? It’s the question that went through my mind before Nitzan graciously explained. Design thinking is a problem-solving methodology that originated in the world of product design and was used to consistently innovate and solve various design products, “but today today it’s used for everything from products, services, strategies, experiences – everything.”

The three pillars of design thinking are – empathy for users, multidisciplinary collaboration and a bias toward action. In a nutshell:

Empathy for users is the process of understanding users – but not just their needs. It’s about understanding how they use products and services, how they experience things and what motivates them.

Multidisciplinary collaboration is genuine collaboration. It’s bringing people from different disciplines together to share  and combine their ideas on human, technological, and business constraints.

Bias toward action is prototyping at its lowest level; it can be new ideas that are simply drawn on a piece of paper but that effectively ignite the imagination and generate more feedback.

Design thinking is the methodology that Nitzan used in collaboration with Stanford’s medical school and nutritionists in order to help people make better food choices. The project was carried out as a part of a d.school class Nitzan was teaching together with Debra Dunn. In that project, the students, under the guidance of Nitzan and Debra, set out to understand people’s short-term food goals and align them with the food offered in Stanford’s various dining halls where a total of 12,000 meals are served a day.

“The solution was pretty simple,” Nitzan says, “…we created new food categories.” So instead of the usual break down of carbohydrates, proteins and fats, the foods were now arranged and categorized as “mood food, energy food and brain food.”

It’s the simple labeling of new food that helped Stanford see significant increases in fruit and vegetable consumption and a decrease in junk food consumption. As a result, more universities and even companies have adopted it.

Activism as a Sense of Belonging

In addition to Nitzan’s profession as a design thinking specialist, she’s also a serious activist on her personal Facebook page where she shares examples of a Judaism she doesn’t feel represents her own Judaism and which she feels is being shoved down her throat.

When Nitzan returned to Israel with her family, after being in California for six years, she found Israel to be a very different place from what she remembered. She was horrified to find that an “authoritarian, disciplinary ironic culture” had taken over schools – so far and foreign from the progressive north California education her children had been previously receiving.

And she felt alone. Because one day Nitzan’s daughter came home from kindergarten freaked out and she didn’t know why. It turned out that that day a man had come to school with a tallit and shofar, explaining that the shofar was taken from a ram’s horn. Except that Nitzan’s young daughter only saw a strange man who brought in a part of a dead animal. And she was scared.

When Nitzan wrote an email to the school, she received no reply. Some time after that she received a very angry phone call from the head of her daughter’s kindergarten, but she had no voice and couldn’t reply.

So Nitzan took to her defunct Facebook account. And she shared her experience. To her surprise she found that other parents felt the same way she did. And so Nitzan continued writing and found that it made her feel less lonely. Because when you return to your country and there are things that bother you to your core, and you find, by chance, that other people are bothered by the same things, you want to connect to them. Because even if your country has changed, you’ve found a way to still feel that you belong.

Nitzan’s activism must be understood within the context of design thinking.

As a design thinking specialist, Nitzan understands creativity’s vital importance in our lives. In order to be able to creative, in order to truly create amazing things, it’s essential that one be open to new ideas and new experiences. In her activism, Nitzan is not attacking religion. She’s stating that the political institution is entering schools and not allowing our children to be open enough to see a range of things that are out there. In other words, the problem is not with bringing religion into secular schools. It’s about seeing religion as the only form of enrichment that deserves attention. And beyond that, it’s understanding that religion is not what’s entering the secular school system. The religious content currently entering secular schooling is politicized religion – a distorted form of religion that has no place in secular schools, and one may argue, any religious school.

I’m grateful to Nitzan for being so generous with her time. You can learn more about Nitzan’s work through her Facebook page.

Special thank you to Bernard Avishai for suggesting an interview with Nitzan.

I learned so much in the two hours that I spent speaking with Nitzan. Here are a few more takeaways from our conversation.

1. Do you believe in having mentors?

I do. I have a lot of mentors…I would say that it’s a lifelong thing. I learn every time in interview someone…because we mirror each other and that’s what empathy is. And so every person is my mentor. Every person.

2. What’s the best piece of advice you ever received?

i. It’s not nice not to be nice. Being defensive doesn’t bring you closer to people.

i.  The Cure Within by Anne Harrington

She’s a professor of History of Science at Harvard. She describes six narratives of how we explain illness and stress and different things like that…People just get sick, right? There’s no reason and there’s every reason but she describes how we create these cultural narratives and how modernity impacts our perception. It’s a beautiful book.

ii. Made to Stick by Dan and Chip Heath

It’s about how you get your ideas to be sticky. It’s fabulous. It’s so simple. It’s well-written and it’s full of great examples.

iii. The Hero with a Thousand Faces by Joseph Campbell

It’s a trip. It’s a very trippy book but it’s fascinating. I think it’s a very important book because he basically describes this incredible idea which is that myths around the world all have a similar structure…So the book particularizes and generalizes myth.

4. What do you find challenging?

5. What helped you push through?

This question came after Nitzan shared that she felt like a loser and phony at the beginning of her career.

…Every once in a while, in Betzalel, I’d get this teacher telling me, ‘listen this is amazing’ or I’d get a client just saying, ‘Listen, we only want to work with her.’ I had a lot of criticism but once in a while there would be a person who made me feel that that whatever it was that I was doing had something special, not just – and frankly I couldn’t do it another way, I just did what I could do.