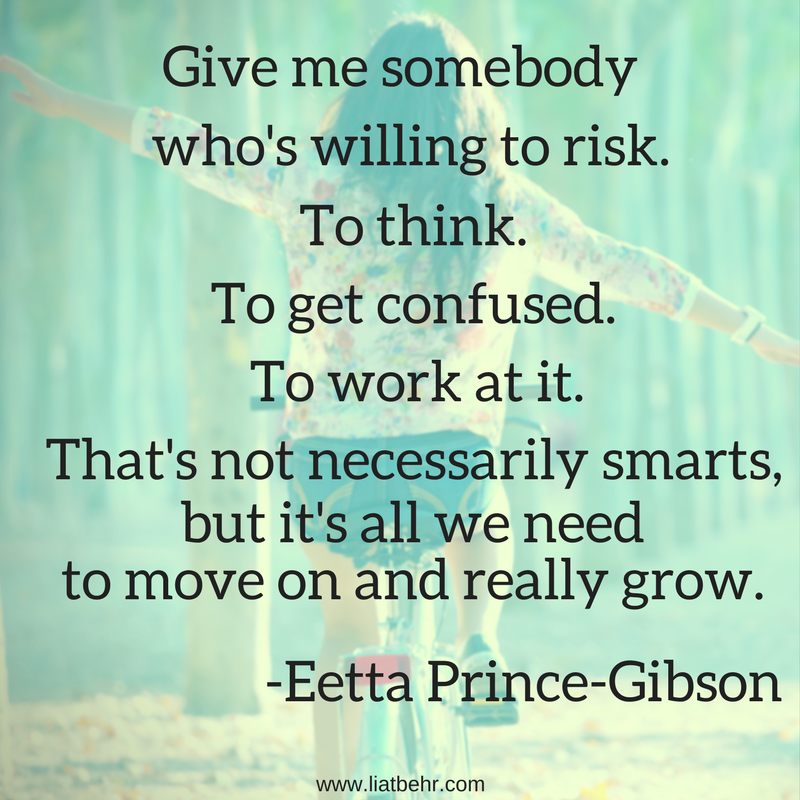 Our world is complex. But wise, courageous and deep-thinking women, like Eetta Prince-Gibson, inspire and challenge us to boldly live the dichotomies the world presents us with, through diversity and equality.

Eetta Prince-Gibson is an incredibly warm person. She is also thoughtful and sharp, openly sharing her smart, complex and profound ideas. Having been a woman at the editorial helm of a leading media establishment in Israel, and having contributed to its significant growth, Eetta’s insights on fear provide not only inspiration, but also a hopeful perspective on how we can improve ourselves with deliberate action.

Strong on the outside but not on the inside

As I review my notes from my meeting with Eetta, I realize how much overcoming fear is central to our lives. Even one as smart, successful and talented as Eetta has had to overcome fear and this feeling of “I’m not good enough.”

Before becoming editor-in-chief at The Jerusalem Report, Eetta shares her feeling of “who am I kidding? I don’t have the qualities for this job.”

It’s a dichotomy in which many women live, “where they don’t see themselves as powerful, even if they are, objectively,” says Eetta, “I don’t think many of us, my generation, have actually come to terms with power, strength and capability.”

Almost as proof for her words, she tells me about a letter Hillary Clinton recently wrote in Teen Vogue; a letter to her teenage self. Entering the gates of Wellesley, even Hillary Clinton felt intimidated and that she didn’t belong.

But by the time the offer to become The Jerusalem Report’s editor-in-chief rolled around, journalism was Eetta’s second career after psychiatric social work. And Eetta knew enough about herself to know that she would be able to figure out her new position. And she did. With help. And that’s another dichotomy that women live in (to be explored soon).

To overcome the feeling of not having the necessary qualities, Eetta took the job and hired professional help – a consultant to help her better understand and navigate her way through her new management position.

Eetta read a lot on management, brought her questions and doubts, and learned a ton.

It’s perhaps the insights and confidence that she gained that enabled her to courageously clash with management on issues such as working from home.

It’s OK not to know everything

Part of being able to ask for and accept professional help involves being strong enough on the inside to trust yourself. In Eetta’s words – “if you can’t trust yourself, then you also can’t ask for information. I do believe in expertise. I do believe in knowledge. I do believe there are people who know more than I. But if I’m constantly battling for any sense of self esteem – then even when there’s not reason I should feel diminished by getting that information, I will feel diminished because everything is a fight for my self esteem.”

According to this important article from The Atlantic, men are more confident than women, and confidence matters as much as competence. Which basically means, women have to get it together. It’s not enough for women to be more highly educated than men. They have to develop their confidence and their self esteem. Not only do they have to be confident enough to reach out and ask for help, they have to know how to receive it.

Eetta points out that often there is too much responsibility put on the mentor. People coming to a mentor, need to put more responsibility on themselves  – to show up and do the work. You can’t come to a mentor with the attitude of “teach me everything you know,” – or in Eetta’s words “Let me be a fly on the wall and I’ll just imbibe. No. You don’t imbibe. You prepare. It’s work. You’re trying to grow. Nobody is responsible for your growth.”

I ask Eetta about the predatory behaviour of men in the workplace that seems to be exploding, even here in Israel.

She replies: I think that probably we can get to a point where we can teach the men -’yeah, we changed the rules, you can’t get away with this anymore.’ And what I’m pleased to see is that there’s anger. It’s being done assertively, not in a victim tone….that’s something I’m very pleased about. And yeah, we can probably change the norms in the workplace. I’m less convinced that this will be the magic moment of equality for women.”

What’s so interesting in what Eetta then continues to say, is that the underlying thought and understanding of what’s driving men’s behaviour is key. If the emphasis is about women’s virtue or protecting women in the workplace, we won’t get very far.

And Eetta goes on. Because it doesn’t in fact stop there, with how much men and women can learn and contribute to each other and the organizations they work for. “The question is are men going to care about how inhibiting it is to women’s creativity when they’re afraid. And that they’re losing out too….they [women] can’t contribute equally because they can’t contribute to the height of their potential because they’re doing something else, like worried about being offended, mistreated, abused, possibly physically hurt, but above all disregarded – then we’re not getting the best out of anybody, are we?

I’m very grateful to Eetta Prince-Gibson for devoting her time to share her wisdom.

1. What would you say is the most important think about leadership?

“What are you leading for? What are you doing? Because if you know what my goal is then I know how to lead. There are different forms of leadership and we could all assume different forms of leadership. I mean we all have our different styles…My goal was to produce a product for readers that I thought could reflect the questions about Israel and Judaism and the Middle East and the Jewish world that are relevant and provocative and important, now. And to do that in a way that upheld values that we as a team believed in and let the staff that I work with live to model the values I believed in. There’s no point about talking about Israel being a light to the nations, or trying to be, and treating people badly.”

“It’s the same advice I give everybody now….Listen to everything, accept nothing unless it resonates with you. Including what I’m telling you. And I know that’s a paradox. But if it doesn’t sound right for you, it isn’t.”

Tempered Radicals – “It’s about people who remain radical in their thinking, in their idea of changing the world. But how do you do that within a framework that may not have the same goals as you do.”

The No Asshole Rule – “…Everybody knows immediately what you mean. It’s the guy, or the woman or the person that when they’re done, you feel worse about yourself, not better. And no, I won’t tolerate that.”