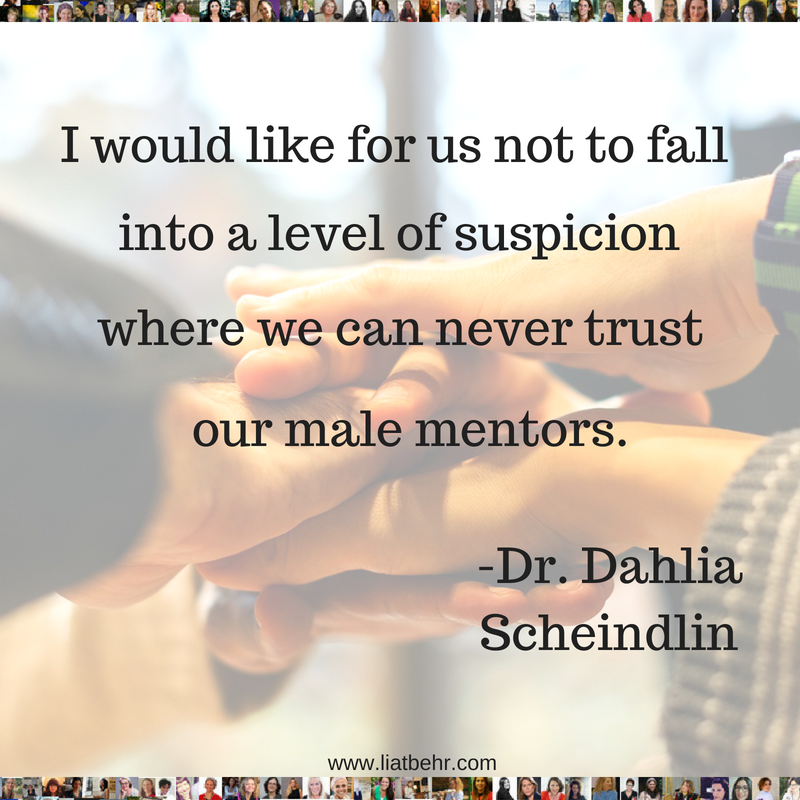 For Dr. Dahlia Scheindlin, the path to a deep understanding of Israeli politics and a successful career as a strategic political consultant, public opinion expert, academic,  journalist and podcaster was not clear cut. But it is one full of of important insights.

Dr. Dahlia Scheindlin is not the type of academic who lives in an ivory tower. In fact, long before beginning her Phd she was heavily steeped in political campaigns around the globe – a career that began in Israel, working with the political consultants who had helped President Clinton win his political campaign back in 1992. From doing an MA in theological studies and all the way to finding her voice, Dahlia graciously shares her deep insights into her journey and successes.

Following your passion can be very messy

The first question I knew I was going to ask Dahlia, was “how do you become a strategic political consultant?” And what I meant was, not actually the steps to becoming one, but how did it evolve in her mind; where did that thought originate?

“Completely by accident,” she replies.

Dahlia has a BA from McGill in comparative religion and an MA in theological studies from the Harvard Divinity School.

What had led her there was her father’s advice – some of the best advice she has ever received: “Just follow your passion.” Except that that advice was also unsettling and even scary. Because when you’re smart and you have so many interests, there’s no goal and certainly no map. And so while Dahlia was highly educated by the time she left university, she also felt extremely unfocused and struggled with the sense that she had no profession, ultimately leading her to a deep existential struggle.

Things ended up well. Dahlia found her calling through working with the world’s biggest political consultants at the time, on Ehud Barak’s political campaign – the one that helped him get elected in 1999.

But what had led to it?

The fact that she showed up “with a broad set of interests and a willingness to work very hard.” It didn’t hurt of course that she was a talented writer. Currently, she has worked in over a dozen countries, has a deep understanding of politics as it plays out around the globe, and is constantly sought after to help parties and NGOs strategize.

And while Dahlia’s father’s advice to follow her passion was helpful, she is quick to point out that saying things like “you need to be open for the magic to happen,” is unhelpful. Because while it’s true, it doesn’t capture how scary following your passion actually is, nor does it provide any insight.

And so while following her passion did help Dahlia forge her own path, it was messy. And that’s why “following your passion” is advice she would only dish out “if you’re prepared for a real struggle.”

And yet, there is something that Dahlia would recommend for anyone looking for their way –  mentors.

The Importance of Mentors

Dahlia recognized her need for a mentor early on. In fact she thinks that not having a mentor earlier may be the reason she lacked direction for as long as she did.

As mentioned earlier, a lack of direction caused Dahlia to feel, in her words, “unmoored.” It’s that feeling that makes following your passion very scary. And that’s where mentors come in. Because they have the ability to not only help their mentees feel like they have an anchor, but also the ability to help thrust them forward to success.

Working on Ehud Barak’s national political campaign brought Dahlia in touch with Stan Greenberg, the famed political strategist and pollster. And that’s where things changed. He recognized Dahlia’s hard work and her ability to think and write analytically. He took her on board and taught her all the stats and polling issues that would help her advance further in her new-found career.

“I think mentors are extremely important,” Dahlia tells me, “men or women, of course it doesn’t matter.” Because doing it on your own is so extremely difficult – knowing which direction you should take, and the steps that will get you there. “Who knows how to do those things?” Dahlia continues, “we grow up knowing nothing.”

However, Dahlia points out, that had she come of age in this day and age, she might have never come to trust her male mentors: “I might have never ever trusted any of them…I would never have been in the situations to bond and get to know them better…if not for a little bit of twist of fate that I met some of these people pretty young. Before I had had really traumatic experiences that made me keep my distance.”

And yet, she says “I would like for us not to fall into a level of suspicion were we can never trust our male mentors.  Because, you know, to be frank, the people who made me what I am, were men who found me, they were in positions of power…they advanced me and put me in situations in which I never would have taken the initiative.”

And while Dahlia now had a direction in which she knew her life was going in, there was still something missing.

Being a voice for other, but not losing your own voice

“All your thinking and analysis – the best possible skills you can possibly muster are going to the benefit of somebody else’s mind, somebody else’s actions, and somebody else’s words,” says Dahlia “and it’s fine, but at a certain point, I think if you have your own personality and you feel very personally engaged, it becomes, you know, one step removed.”

Dahlia goes on to say that in her work, as much as she enjoyed it, it wasn’t enough. She wanted to be speaking in her own voice. It was around that time when she was desperately searching for a way to develop her journalistic writing and writing articles, blog posts and the occasional op-ed, that she met Eetta Prince Gibson. They got talking about the Israeli Palestinian conflict and Eetta offered Dahlia to start writing a column in the Jerusalem Report magazine, which helped Dahlia further her journalistic writing talents.

A little bit after Dahlia finished her column with the Jerusalem Report, she stopped everything to take time off to complete complete her Phd, thus deepening her understanding of the hands-on politics she was heavily involved in.

Later, together with a small group of people, she started the English language website +972, to bring the perspective of left-wing politics to the English speaking public.

Today in addition to writing for +972, Dahlia is also sharing her voice and deep insights on The Tel Aviv Review podcast.

I’m so grateful to Dr. Dahlia Scheindlin for sharing her time and her insights.

Special thank you to Bernard Avishai for suggesting and putting me in contact with  Dahlia.

So many topics came up in my talk with Dahlia. Here are a few more takeaways from our conversation.

1. A tip you think can help women do better.

If you’re ever hemming and hawing and wondering about whether you should go up to somebody at a conference, the answer is yes. Always. Why would you not? … A good test of when you should reach out to somebody you’re a little bit intimidated by or if you should take an opportunity, if you should jump into a conversation – sometimes I ask myself – “would a man do this?…and then I just do it.”

2. How do you define success?

Success for me are things that make me feel good even if they’re little things…when I’ve manage to communicate what I think to the world, people want to hear more of it and they want to amplify it. So that feels successful but I feel like these are not huge things.

I would say read fiction, read non-fiction and read things that are outside of your geographic interests.

4. What piece of advice can you offer to women?

If I had to give a piece of advice to a woman, or anybody, but especially a woman because I think we have a tendency to view rejection and failure as the final word…I really think that the biggest mistake I made in life, for two decades, in my 20s and 30s, was believing that rejection was the final word. Or that failure was a fact, instead of failure being simply a sign post that I need to try again. And I saw people around me for whom failure was just one more reason to keep going, which was the opposite direction of what I took…I think that was pure and simple mistake that I didn’t understand earlier. And I would advise everyone to know – if I had had one person tell me, when I was twenty-two years old, ‘You didn’t get what you wanted. Awesome, next time you will.

And another thing. Don’t miss your deadline. I don’t care how you do it. If you have to work, if you wanna work scattered like me or be super-disciplined and work eight hours a day, from nine till five, whatever. But don’t miss friggen deadlines.

We all have deep insecurities but it really bugs me when women aren’t able to have the quick, instinctive conversation with themselves of ‘okay, I’m insecure. It’s a little scary to jump into this setting, but I have to do it anyway.’

The other things that gets me going is apologies…starting a conversation or a lecture or a public thing with women saying, ‘I just want to start by apologizing that…’ No. Just no. Humility? Yes….starting out with a sense of being flawed? No.