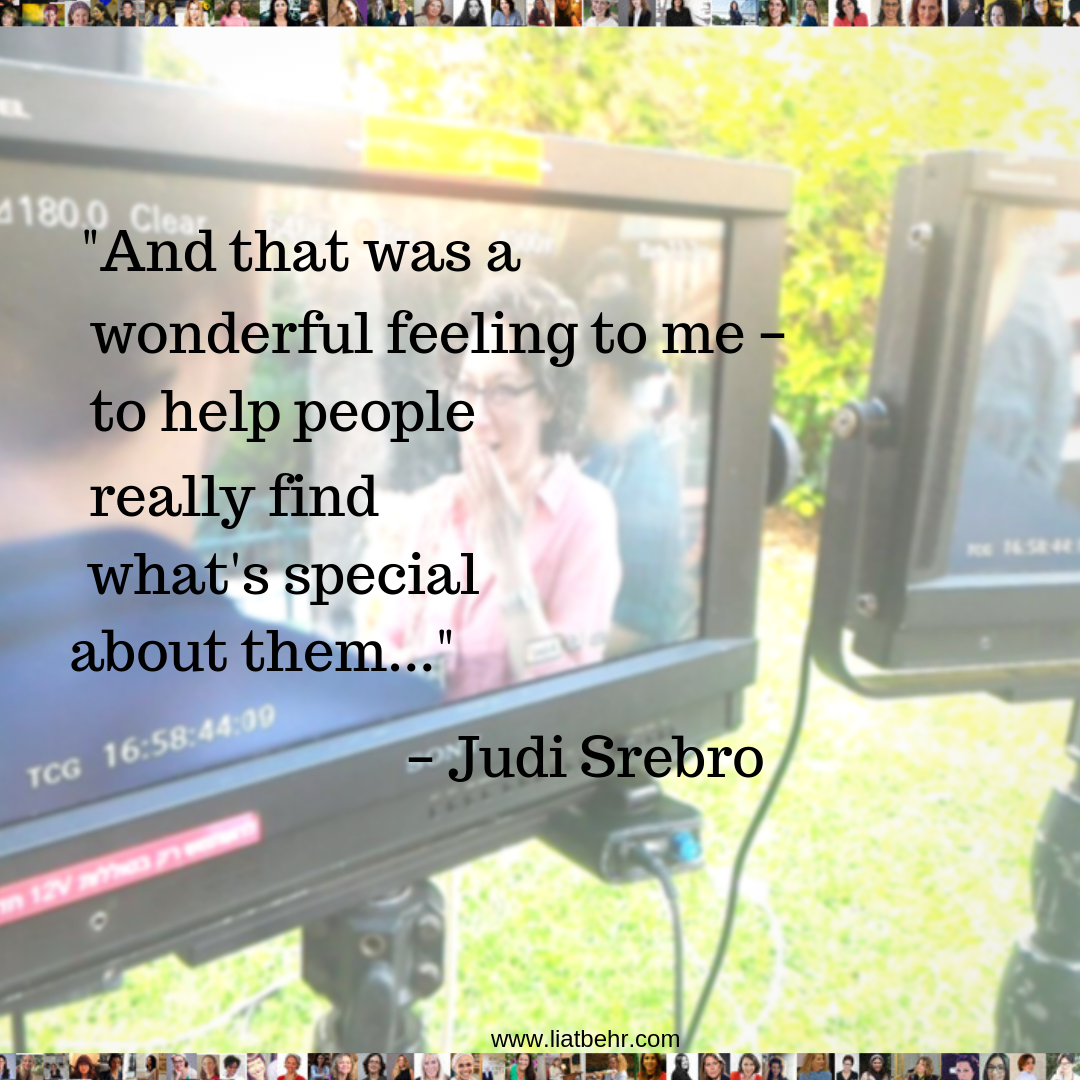 Being born and raised in Hollywood may have contributed to Judi Srebro’s interest in the arts, culture and mainstream pop-culture. But there’s much more to what helped Judi become Israel’s celebrity whisperer.

Judi Srebro was born and raised in Hollywood where her interest in the arts, culture and mainstream pop-culture influenced her drive to participate in plays throughout elementary school and high school. At (high school) graduation, she received the drama award.

“It’s always easier to play someone else than be yourself,” Judi tells me, “…most actors are shy. Especially the ones with the huge personalities on screen or on stage.”

Judi’s journey is a fascinating one. Though unaware of it at the time, she strategically built her path to success. She studied speech and hearing but never took her eye off her goal – the desire to “help people public speak, connect with their audience and tell their stories.”

Judi received her degree in Speech and Hearing Communication. But a required course in public speaking may have had the most profound effect of all.

“I did well. I spoke and people told me they felt that I made it look effortless, like I wasn’t even trying when in actuality, in my entire college career I worked harder for that class than any other…”

So much of Judi’s energy went into thinking about what goes into the content and how to deliver it, physically and verbally, hand gestures and posture and all those things most of us don’t even think about when we hear a speaker. And yet those elements deeply affect the way we, the listeners, receive the speaker’s message.

“I worked hard. And I did well. I helped my classmates and I helped my roommates, when they had to prepare. And I loved it. I loved working with people and helping them express themselves well.”

So already then, in college, Judi knew what she wanted to do. In fact, in her senior year of college she had a “cute little notebook” in which she had lists of people she’d like to meet, books she wants to read, companies she may want to work for.

She even sent out resumes and applied to organizations and corporate institutions. But they all thought Judi, fresh out of college, lacked business and life experience.

And while Judi hadn’t realized it at the time, she had clearly mapped out her route to success.

After making aliyah, Judi’s first job was at the Joint, where she told the head of her division of her dream to “help people public speak, connect with their audience and tell their stories.”

Sure enough, she became the outbound director, responsible for the logistics of speaking tours and helping speakers prepare to tell their stories.

Getting People to Know and Respect Their Own Stories

Judi is the person that helps us to look at out our own stories and say “Wow. I have a story. I’m amazing.” Essentially, she helps us find our own voice and in doing so empowers us to take our life and work to a completely different level.

But Judi prompted her to tell her special tale, explaining to her that each of our stories is unique in the same way that we are all unique. It turned out that director was one of the first Ethiopians to serve in the Israeli army, and that in fact, her story was interesting in a way that she hadn’t previously thought about.

“When we put together how she could tell her story and what she could include, she [the director] said ‘I really do have an amazing story.’ And that was a wonderful feeling to me – to help people really find what’s special about them, to feel empowered and to communicate to others in an effective and articulate way.”

The Power to Make Our Own Dreams Come True

Judi was still strategically working toward her goal when she declared she would work with an actor she had seen on TV. This didn’t come out of nowhere. It was prompted by her sitting on the couch with her then roommate, watching him perform Elton John’s “Your Song” in duet (in English) with Ninet Tayeb.

“I’m going to help him professionally,” she declared. “If he wants to sing in English, he can’t sing like that.” Her roommate looked at her and said “okay, Judi, calm down. Yeah right.”

Judi’s roommate came home to find that same actor sitting where she had sat four years prior, when she told Judi to calm down.

So how did this come about?

When Judi first saw the actor perform on TV with a less than stellar English accent, Judi was still working at the Joint. She was constantly reading local entertainment magazines in Hebrew so she could know what was going on and who everybody was. Her Hebrew improved dramatically. She got to know who the actors and agents were and kept up with all the latest in Israeli celebrity gossip. She wrote letters. She didn’t get responses.

The actor Judi had seen on TV was coming out with an album (in Hebrew) which he created with another artist. Judi went to his concert with business cards for her speaking business in her bag. What Judi didn’t realize was that it was the premiere concert – so it was packed with VIPs and agents.

Having been familiar with Israel’s celebrities who’s who, Judi recognized the actor’s agent. She tapped her on her shoulder and told her that if the actor wants to sing in English, she would be able to help. Judi followed up two weeks later and met with the agent’s assistant. The rest, as they say, is herstory.

I’m grateful to Judi Srebro for being so generous with her time and valuable insights. You can reach Judi through her site, read more about her on IMDb and even catch her in a cameo in “Greenhouse Academy” (season 1, episode 10).

In our long conversation, Judi and I covered a lot. Here are a few more takeaways from our conversation.

The best advice I ever received was in Los Angeles at Venice Beach. There’s this guy…he wears a white turban and all white and he rollerblades playing his somehow electric guitar…He’s a really famous character. And he passed by me one day while I was walking. I must have been a teenager. He said “do me a favour and be who you are.” Words to live by.

2. Was there any failure that set you up for success?

I don’t know if I’d call it a failure, but I sent out so many resumes in America and also in Israel and I didn’t get response or I got a rejection. And rejections hurt, but they’re part of the process.

I recently had a conversation with someone who said failure is not trying; that’s the only real failure. I know I’ve been that way. But now I give things my all. They’re not always the best, sometimes they’re really good, sometimes they’re not. But it’s worth learning from mistakes more than it is to not make any.

3. What books do you strongly recommend?

Any of Deborah Tannen’s books. I’ve also heard her speak and one thing that’s really been a strong and useful point for me is how different people communicate, even considering tone and pace, beyond just the words they choose, and how it has a major effect. And the pause…I continue to reference them, write about them, and speak about them with clients.

4. What do you think every woman needs in order to succeed?

Self respect. You have to respect yourself first…that covers everything. But let’s take it to a specific example. If you respect your value, what you’re capable of, then you will achieve the things that you want to achieve. If you downplay them and say ‘big deal, I don’t really do much, I can’t really do much, I can’t make a difference, you’re not respecting your capabilities or your talents and you’ll live up to that and you won’t achieve. So when I say self-respect, it’s respecting what you are capable of doing and the power that you have.

5. What did you teach yourself about money to get to the point where you are now?

What’s helped me a lot and helped me come a long way is looking at others and saying, I will go into the store and I will purchase this item because I value it, want it and will pay for it. Or I will go to a professional and seek their services and pay for them. In the same respect, I’m providing something that people need, want and can benefit from and are willing to pay for it, too.