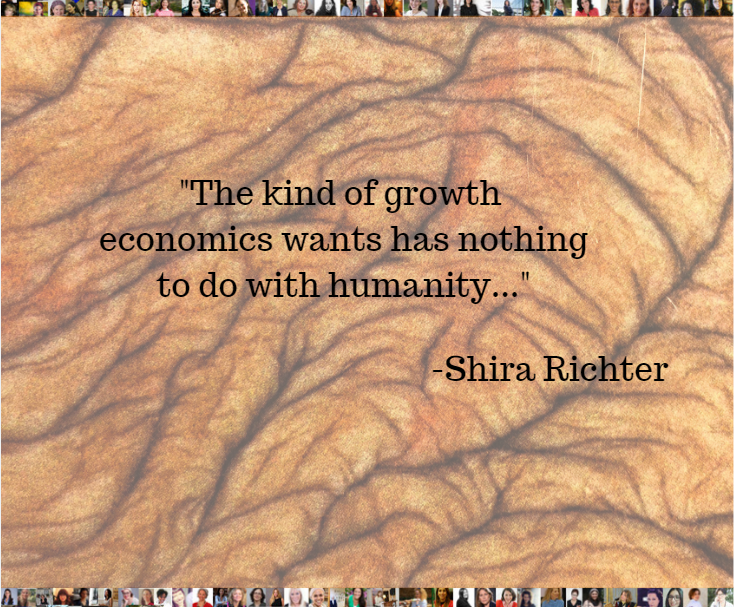 Shira Richter is a multidisciplinary artist-researcher connecting economics, art, gender and women. She brings her unique and complex understanding to both her academic and artistic work, lecturing, curating and teaching about our current economically divisive society and the shift in thought that needs to take place in order  to change it.

Shira Richter is not intimidated by our complex value system. Her vast interests and work span disciplines and mediums that while difficult to neatly compartmentalize, provide insight into our feminism, politics, economics, gender, psychology – and the list goes on and on.

Through her academic writings and artistic achievements, Shira tackles difficult subjects and ideas, making them accessible and interesting. Her purpose is to help both women and men look at the world in a different light, providing them with the ability to evaluate society and themselves differently.

I met with Shira in her studio in Herzliya to discuss some of the ideas that stand behind her work.

After ten months of pregnancy that culminates in childbirth, many women’s body are beaten, torn and frayed. At that point, most women might find it hard to believe that the body will ever be able to bounce back. Shira explains: “Many mothers told me that for a year after giving birth, ‘I looked at myself from the neck up’, I on the other hand, am an artist who is tempted to look at the things we hide.”

To be more specific, Shira noticed that the reservoirs of wrinkled skin on her post-birth body resembled the topographic textures of Mother Earth. For Shira, human rights is about fighting for Mother Earth. “What most women don’t know,” Shira says, “is that after they become a mother they will be treated like shit.” And it’s not their fault, because the information is simply not out there.

The way mothers are treated doesn’t make sense, Shira says.  If the economy were to in fact value life, we would see it in its support for mothers, in research that benefits mothers and in actual life. So can we in fact say that the economy values life? The answer is a resounding no.

Before change must come understanding

Changing the way people think is arguably one of the most difficult things to do. In fact, effecting change in the ideas that are at the heart of the philosophy of our culture may sound impossible, and perhaps would be, were we not willing to change the way we think. Because thinking differently is what’s needed to bring change to issues that are so deeply rooted in our society. We have come to accept that economics is about allocating resources. But this acceptance has also caused us to forget, that ultimately economics is supposed to serve people – both men and women. And certainly, it should serve men and women equally. Except that when we come to talk about a fundamental concept in economics such as productivity – women’s unpaid labor of producing children and caring for them is not at all calculated in a country’s GDP, thus undermining women’s contribution to economic productivity and rendering them invisible – thus giving rise to the idea of a feminist economy.

Shira goes on to explain that at its very foundation, the economy lacks humanity:

“Economics says that it is interested in growth while it does exactly the opposite. The kind of growth economics wants has very little to do with humanity  or with values that are important in our current day and age such as community, cooperation and inclusivity. Those beautiful values have no meaning. So in fact, at the root of the current economy is a  system that negates life, creativity and creation.”

If we cannot rely on the economy to care for us, we must find other places to provide us with support. One would think that it is obvious that other women will provide us with support. And while things are changing for the better, solidarity among women is still a sorry state of affairs, explains Shira. For example, in the art world, women are more pertinent if they have a solo exhibition, as opposed to a group exhibition. In fact, Shira says “the whole hierarchical system is embedded almost violently in the art world.” She goes on to say, that instead of being built to help people or promote a number of great ideas, what we have is a system that “isolates us by telling us we are in competition, makes us turn against each other and makes us  believe that we are weaker when we share ideas in the name of the people who came up with them.” Shira is actively changing this hierarchial system at every possible opportunity. “When I present at an exhibition,” she explains, “instead of only providing my ideas, I try to bring care ethics and the quality of valuing everyone in the room.” And while it’s not an easy feat, Shira attempts to share other people’s value by creating something that includes a bit of everyone. This can range from quoting people in the room to sharing a less popular opinion or idea that someone has shared.

This idea, that women must actively help women in every possible way, brings to mind what women in Obama’s administration have done to help each other. It makes me think that where women recognize that they care about equality and as such the promotion of women’s ideas, they have the ability to transform the idea into a value and an action.

The bottom line for Shira is that where we can, we must actively seek to help other women and challenge the patriarchal system which believes in divide and conquer.

I’m grateful to Shira Richter for sharing her time, her art and her insights with me. You can follow Shira on her Facebook page and YouTube channel to learn more about her art and ideas. Shira will be taking part as an international artist in the ART TO CHANGE THE WORLD event in October 2018 in Minnesota.

CREDIT for image with quote: Detail of image by Shira Richter: Bird’s Eye (from The Mother, Daughter & Holy Spirit)