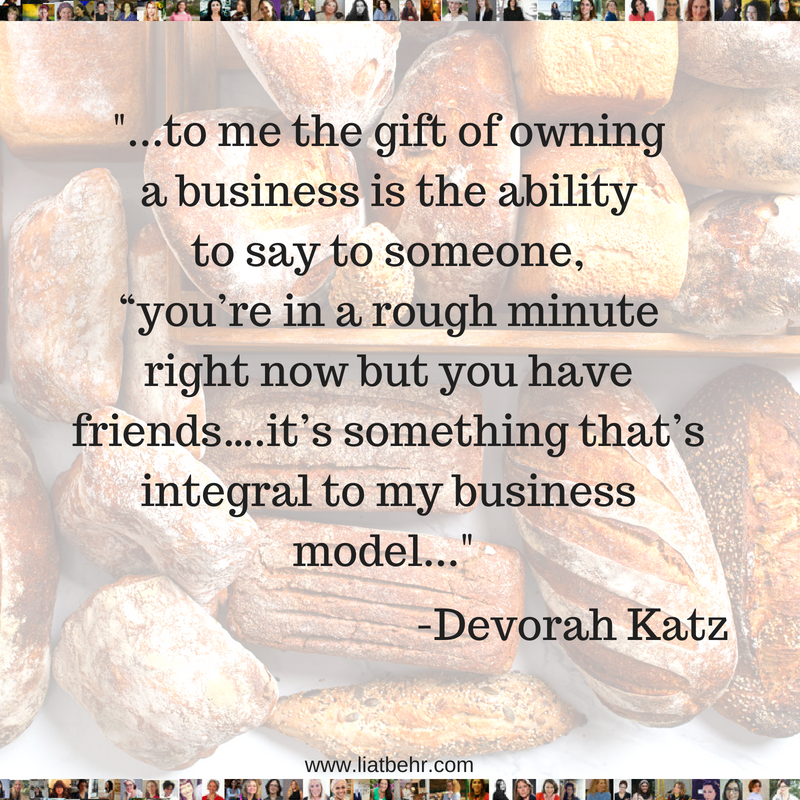 Meet Devorah Katz, the marketing powerhouse behind the unique bread shop that provides visitors with the hands-on opportunity to a delicious historical, educational and cultural experience.

Devorah Katz (together with her husband David Katz), is the owner of Pat Bamelach, the experiential bread bakery in Rosh Tzurim and Efrat. David bakes the bread, the vehicle through which Devorah connects with people. At the heart of her journey from being an educator to marketing her family’s bread, lies one thing – her love of people.

From Educators to Restaurateurs

Devorah and David Katz are quintessential educators. In their parallel teaching universes they each worked to bring the hands-on experience to education, believing that it’s the only way for students to effectively learn.

A passion to teach and a passion to learn, are arguably two sides of the same coin. David, was already baking matzah when he suggested that he learn the concept of chametz – unleavened bread. This led to David learning sourdough bread – the type of bread referred to in the Torah, and which has developed into Pat Bemelach’s bread workshops.

Devorah was not interested in learning to bake sourdough bread and one of her first reactions to David starting a bakery was “it’s okay if you fail because we’ll have what to eat.” But where she did find her place is in her passion with connecting with people.

And while it took Devorah some time to get on board, at one point she realized that she would have to be fully on board to have impact. So Devorah began working behind-the-scenes and running and booking workshops.

And soon, with the success of their bakery in Rosh Tzurim, Devorah and David realized that they needed a factory. Except that they got more than they bargained for – and in addition to a factory, they found themselves with a second store and restaurant.

But they had a problem. They knew nothing about running a restaurant.

Being eager learners with a no-ego attitude, they set out to tackle the ins and outs of what it takes to be a restaurateur, reading “copious amounts of business books,” and talking to businesses.

I ask Devorah about what it’s like to run a business with her husband. How do you make it work when the pressure and the stakes are high? Devorah replies, that it’s certainly not easy. It’s important to “define who you are and find your sense of space and place.”

For David, that means baking bread. Sourdough symbolizes a great many things including returning to one’s roots, patience, authenticity, humility…

For Devorah, it means, learning humans, getting to know them and understand them. In Devorah’s words “bread is the vehicle that gets me to do the things that I love doing.”

But at the core of it all, is authenticity.

It’s a beautiful and unique authenticity that has grown organically. In other words, Pat Bamelach is a completely natural extension of the values that Devorah and David embody.

And it permeates everything they do, including the look and feel of their brand.

Devorah Katz is enchanting. Upon meeting her, she immediately takes an interest in you and you want to be her best friend, because she’s smart, charming and witty, not to mention, caring, warm and generous. And this is what I meant when I wrote earlier that Pat Bamelach is an extension of the values Devorah embodies.

It is moving, though not surprising, to hear her say …”to me the gift of owning a business is the ability to say to someone, “you’re in a rough minute right now but you have friends….it’s something that’s integral to my business model, which is that food does equal love on some level and hopefully in only the healthiest ways…”

For Devorah, “it’s always about building with people and building something up with people.” Which is perhaps why Devorah is so successful on social media. At one point, Pat Bamelach was selling pizza dough and Devorah shared it on Facebook. Before she knew it, people were posting what they had made with the dough – somebody made cinnamon buns, turning the original post into a recipe fest. That type of magic can only happen when people feel that they belong to a community.

And while Community Builder may not yet be a prevalent job title, you just met the original.

I’m grateful to Devorah Katz for sharing her time and insights with me. You can follow Devorah on her blog to get great recipes, follow Pat Bamelach on Facebook or just head over to Efrat to enjoy a delicious breakfast or buy your favorite sourdough bread.

Be compassionate with yourself.

i. Setting the Table by Danny Meyer – because it speaks to who we are. It’s about a restaurateur in the restaurant business and it’s like a bible for us.

ii. Urban Monk by Pedram Shojai – it talks about how to balance everything in an a very extreme.

iii. Lead Your Tribe, Love Your Work by Piyush Patel – the book reflected the same values that I have about leadership and team building.

3. What’s podcast do you love listening to?

How I Built This with Guy Raz – It’s inspirational in a crazy way because almost inevitably in any one of those stories there’s always a moment that they’re like – “and then it all went to hell.”