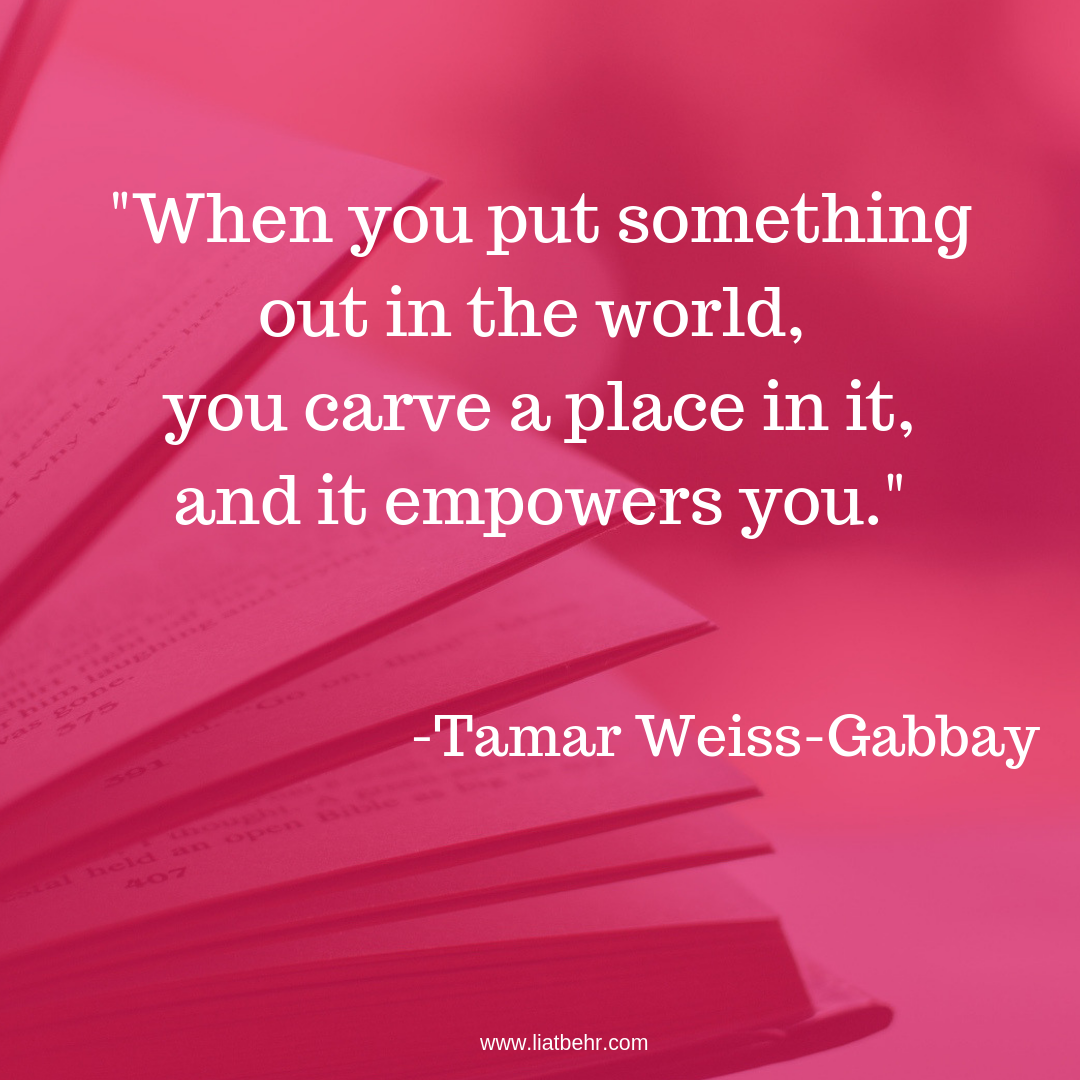 As the definition of feminism continues to evolve, Tamar Weiss-Gabbay has been able to evolve with it, using literature as her platform.

Growing up in the eighties and nineties, it might have been easy to think that the revolution was over and that equality between genders had been achieved. After all, women could fully participate in the profession of their choice, and they had more power, and could share their voice more than ever before. But it was then, that many of us thought that to be a feminist was to be like one of the boys.

Speaking to Tamar Weiss-Gabbay, I learned that this idea of feminism was not unique to North America in the eighties and nineties. After all, Tamar grew up in Israel. And yet, she was able to overcome her own bias to become a social entrepreneur, promoting social change through books and literature.

Overcoming bias is not easy for any of us. It means constantly checking in with our own attitudes. Tamar has always been a feminist. But she shares that growing up, feminism for her meant being like a boy – going to the army, being tough and strong and the more you were a tomboy, the better it was.

Through a conversation with a friend and ideas they bounced between them, they thought about starting a group for writers in Israel. But after some research, they found that in North America there were groups specifically for women because women authors were grossly underrepresented in the literary world.

This brought about the creation of the Forum for Women Authors and Poets in Israel, in the form of a Facebook group where authors and poets from all over Israel share their knowledge and insights into Israel’s publishing world, information about prizes and have annual meetups – which Tamar organizes.

Before that, Tamar says, “I [only] read books by men because I thought they were the good writers. I never thought I had a bias. I was just blind. Like a lot of people are. Not because of bad intentions, it was just blindness. And then slowly, I started seeing how it plays out in other areas of my life…”

A few years ago, Tamar and friends in other cities, created an alternative festival called The Mend. Actually, that’s the name I just gave it in English. Its Hebrew name is Tikkun. And it was called so, for a couple of reasons. The first, is that it took place around the Jewish holiday of Shavuot when traditionally Jews stay up all night to learn Torah in what is known as Tikkun Leil Shavuot. The second (and more importantly), is that The Mend was a poetry festival created as a protest to mend a situation and provide an alternative to a festival that was being managed by a man who defended the sexual exploitation of young girls and who systematically excluded women from contributing to a well-circulated newspaper literature supplement.

(I don’t begin to understand how the newspaper didn’t fire that guy or how he was hired to manage the festival. But one must keep in mind, that in Israel, discrimination against women is often accepted, if not encouraged, in many places, including the Knesset.)

As a result, hundreds of men and women refused to participate in the original festival, and instead participated in the Mend Poetry Festival which took place simultaneously in four Israeli cities: Haifa, Tel Aviv, Jerusalem and Sde Boker.

As a result of that festival, Tamar and the same seven friends that created the alternative festival, began producing a bi-weekly online newspaper (an alternative to the well-circulated literature supplement) called:

“Because the garage is where you fix things.”

It was important to Tamar and her friends, to create a literary platform in which both men and women could equally contribute. “I don’t think we compromise on artistic value,” Tamar explains, “the works are on a good level and the reviews are good. Though we publish reviews on books that are not great, we focus on the things that are worth thinking about; we’re not negative for the sake of insulting, or degrade an author in order to create an audience.”

The Garage is an online Hebrew literary publication of poetry, fiction, non-fiction and book reviews. It’s published bi-weekly on the National Library of Israel’s website.

Somehow stopping here feels like I haven’t given enough information about Tamar and how amazing she is. And while there is not enough room here to talk about all her projects, I do want to mention that apart from publishing four books and a fifth is on the way (January 2020), and in addition to the projects mentioned above, Tamar is also the mind behind Jerusalem’s reading stations in which old bus stops were transformed into street libraries where people bring their books and exchange them for others they want to read. The project is highly successful and in addition to a 24/7 book swap, it has generated volunteer-based activities around reading and literature, for both adults and children.

I’m so grateful to Tamar Weiss-Gabbay for sharing her story and insights.

In the time we spent together, Tamar shared a lot of insights, (none here about productivity). Below are a few more takeaways from our meeting:

“I don’t know if it’s the best advice I received, but it really helped me. I once asked someone how she succeeded and she told me, ‘I did a bunch of stuff and I didn’t succeed a ton of times. And once I did succeed.’ And she told me to try it as well. Not succeeding is part of the game. You do a bunch of things and some will succeed and some won’t. Until then, I saw all my failures as mistakes. Sometimes people tell you something and it sounds cliché. But if it comes to you at the right time, then it fixes your thinking.”

2. What’s the best advice you can offer others?

“To keep going, keep moving. When something isn’t working, try something else. I changed high schools, cities, majors in university. When I made changes, things were always better and I never regretted it.”

3. What books do you think every woman needs to read?

Books that I especially identified with are: The Hour of the Star by Clarice Lispector 4. What do you think all women need to know in order to succeed?

“There’s a saying that a person needs to hold a note that says “the world was created for me,” in one hand, and in the other a note that says, “I am nothing but dust and ashes.” In the same way, a woman needs to know that on the one hand she can do everything, but on the other hand not to be blind and think that everything is already solved. Rather, it’s important to be aware that there are still a lot of women’s issues that need to be resolved and that the solutions are not yet clear and there are no magic remedies. Things are [still] very complicated, especially for mothers.”

5. What was the best investment you ever made?

“With each of my children I spent at least three years at home. That’s something that was important for me. That basically says that I was at home for the past decade…sometimes it was hard and sometimes it was frustrating, but I’m happy I did it.”

Which of Tamar’s takeaways was your favourite?