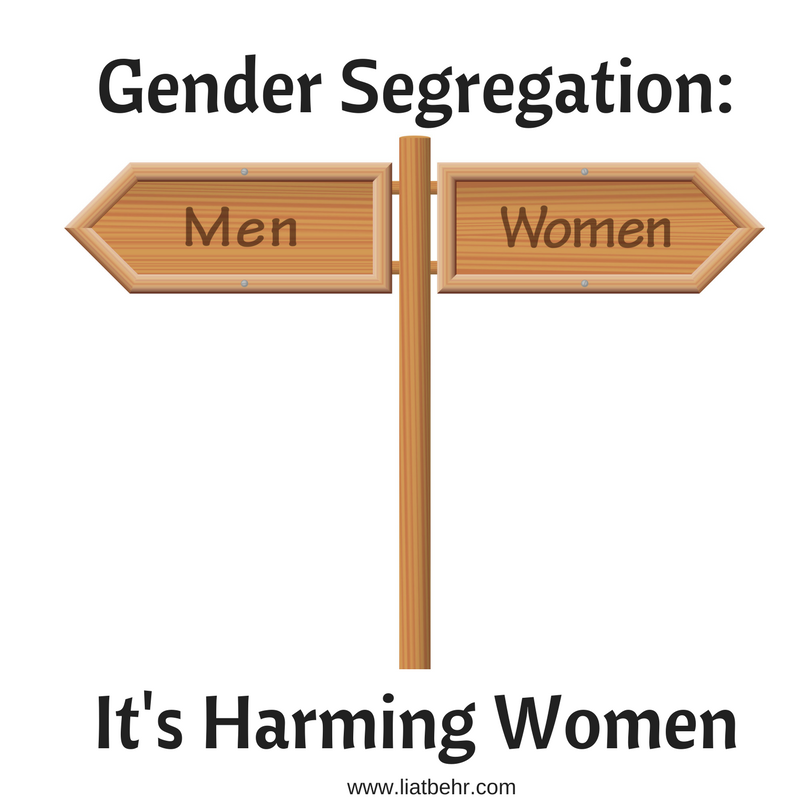 Israel is a modern country based on modern values. But it is also a place where many believe that synagogue should inform state, where women-barring religious parties make up almost 11% of the Knesset, and where gender segregation is becoming increasingly pervasive.

We’re not going to blame religion. Yes, Jewish Law is patriarchal. But precisely because it is patriarchal the wise rabbis always looked for ways to protect women. In fact, Judaism until modern times, has always been one step ahead of secular society in fostering women’s rights.

Sadly, this trend has changed in more recent times with the advent of feminism and has been replaced with the current trend of subordinating women and maintaining male power.

But we’ll leave that for now and stick to the subject.

Gender segregation is on the rise and it’s harming women.

There are currently two religious parties in the Knesset. Both of them bar women. And despite that they both flagrantly defy discrimination laws, they are nonetheless considered legitimate parties. One may think that is the cardinal sin that abets all other arenas for gender segregation in Israel. One may also note the hypocrisy – men and women may not sit together in the same party but they may sit together in the Knesset and in committees and forums.

Segregated university programs for ultra-Orthodox students are a double-edged sword. On the one hand they enable, support and empower ultra-Orthodox men to seek a higher education providing them with the ability to earn more. On the other, they do not encourage or prepare these men to live in the real world where women exist and where the real jobs are. If that were the only effect, perhaps we women could live with it. But it’s not.

The Israeli Supreme Court has ruled that while each person is entitled to sit where they prefer, certain public bus routes that cater to the ultra-Orthodox community may still segregate seating so long as they don’t need to request or coerce women to sit at the back. At its basis it assumes that all women prefer to sit at the back. But what if they don’t? And what if women want to sit in front but fear being intimidated or pestered?

When my son turned three, I thought it would be meaningful to take him to the Western Wall to put on tzitzit for the first time. But when we got there, I was shocked and outraged to learn that there is not one part of the wall that one can get to as a family. The Western Wall is a symbol of Jewish history, of our covenant with G-d and of our exile because of hate and divisiveness. It is also a place where women cannot worship G-d in the way they see fit – they may not don prayer shawls, they may not don phylacteries and they may not read from the Torah. In addition, as explained to me by Anat Hoffman, the reason women cannot speak at the opening ceremony of Israel’s Memorial Day for fallen soldiers, is because women may not use a microphone at the Western Wall.

Women in Israel are discriminated against on a daily basis. The perpetrators perhaps come from the ultra-Orthodox sector but they are aided and abetted by the the government and Israel’s Supreme Court.

Gender segregation harms women. And it’s time to stop it.

I wonder if it’s not time for a new political party – one that is made up of both men and women that believe that feminism is a moral issue and not a women’s issue, and one that will include women from all sectors of society to ensure that women’s voices are heard and that gender segregation is curtailed.

How else is gender segregation harming women? What should we do about it?