It’s 2021. We know that there’s no reason for women to be paid less than men.  And yet, women are still discriminated against when it comes to pay, and women still have to look for ways to hack the gender gap.  So why does this happen – why do women get paid less?

Answering this question is important. Not because there are any good reasons. There are none. But, if we can understand why it happens, or at least try to, we can make better decisions for ourselves, and perhaps even take action.

Here are 9 reasons women get paid less than men:

It’s not that one day women all of a sudden started being paid less than men. Rather, ever since they joined the workforce in droves during World War II, they have been paid less. Back then, there were no pay equity laws. Back then, companies could justify women being paid less to themselves and get away with it. And while today there are pay equity laws, some companies still try to get away with it. This happens because once people have benefitted from women earning less, they’re going to try to keep getting away with it.

More and more businesses understand that gender equality in the workplace is better for business – and that includes getting rid of the wage gap. Organizations with increased gender diversity outperform those that lack it. Businesses benefit when they have both talented men and women, and companies that seek equality are also looking to fix the gender gap as it relates to their business. Before you join an organization, learn about its gender diversity culture and how women are renumerated. If you’re a part of an organization looking to improve gender equality, speak to Yael Nevo at Genderscope.

Take for example occupations such as engineer and programmer, and compare them with such occupations as teacher and occupational therapist.

Typically, more men than women are engineers and programmers, and more women than men are teachers and occupational therapists.

We can get better jobs and encourage our girls to join STEM programs, as well as other occupations that generate more money. But even if you are a teacher, and want to remain one, and the only thing bother you is your pay, there are creative avenues to make money teaching. The long game however, is to change the gender structure of society, as suggested by Susan Moller Okin in Justice, Gender, and the Family , in order to completely develop a “nonsexist, fully human theory of justice.”

Women are often also caregivers – whether to their children or aging parents. The result is that they work less hours to accommodate their unpaid caregiving responsibilities. Working less doesn’t only mean less pay, it also means a lower hourly wage, and less benefits than comparable full-time work.

It is important to bear in mind that there is no hard and fast solution, or one that fits all. And perhaps, there is no solution at all if you want to be the one to care for your child and work part time.

Having said that, try to keep your options open. As Sheryl Sandberg says “don’t leave before you leave.” In other words, don’t enter the workforce thinking about the time you will leave. Work hard to develop a career you’re good at and will want to develop. Give yourself the option to come back full-speed to a career you love, even after you have a child.

This sounds harsh, because it is. Working mothers are systematically paid less, are perceived to be less competent and committed, and less authoritative.  The implications are not only less pay, which they receive for less hours and a lower wage (as mentioned), but also, hiring and promotion penalties. Further, women who earn less, will be more likely to stay at home with their children, and when they make the decision to return, their incomes will be lower and they will have saved less money by the time they retire. 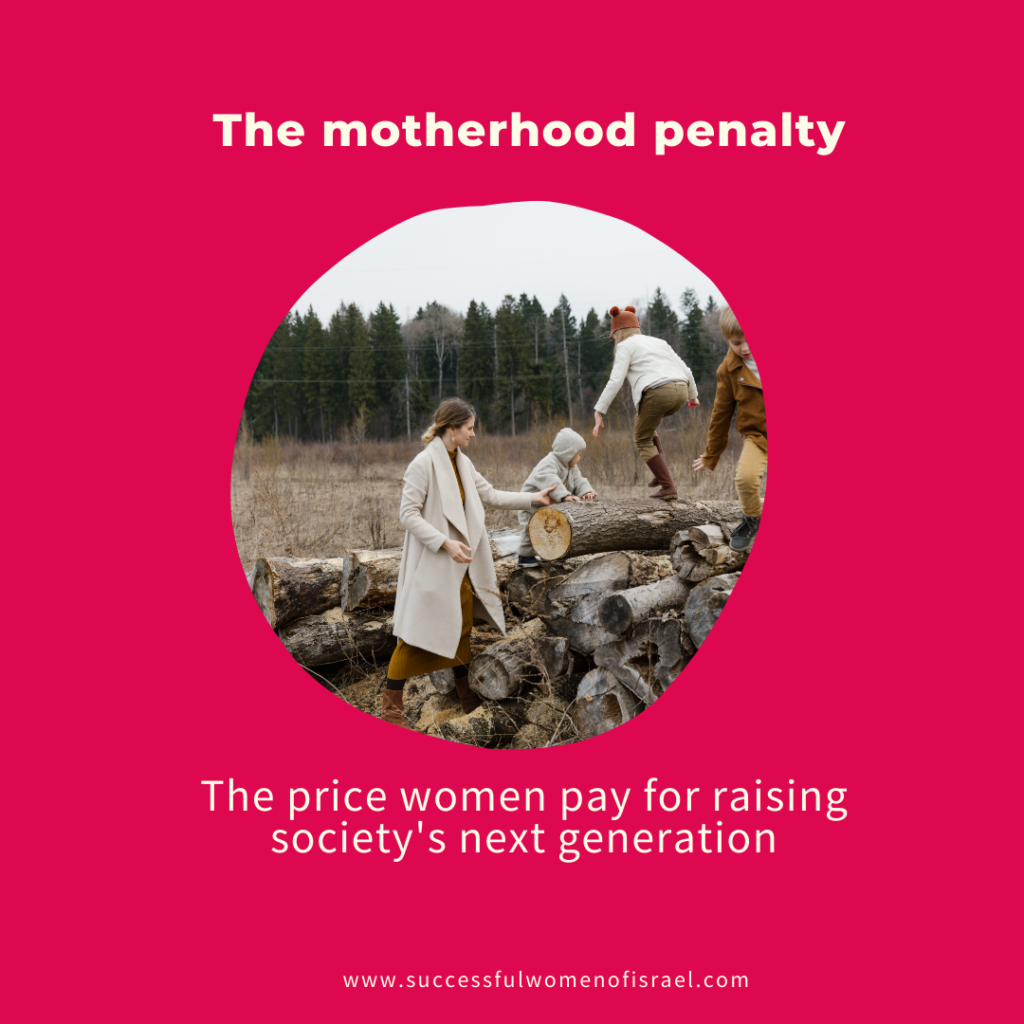 This is a tough one because there is really no reason for the motherhood penalty. According to a study conducted between 1992-2006, cited by Adam Grant in his Audible book Power Moves, S&P 1500 firms that had more women in top management, showed better financial performance.

This is one of the reasons why we need to be working toward a more just society.

Pay secrecy is unfair and should therefore be unlawful. If you live in a democracy it’s important to get the message to legislators. A fair society doesn’t just happen it needs to be built.

6. There’s a price to pay for suing

Pay secrecy laws make proving the wage gap difficult. And while it’s not impossible to prove, it’s important to bear in mind that there are financial and emotional costs involved. Employers often have deep pockets and can be ruthless. And even if you win, other companies may label you as a troublemaker and avoid hiring you.

While there are laws that are meant to protect employees against discrimination by barring them from making decisions based on gender, age, and marital status. Here in Israel, though also illegal, many interviews at many organizations, continue to include questions about marital status and questions about children – born or unborn.

When I was newly married, many years ago,  I was asked at a job interview about my plans for having children. At the time, I didn’t have the courage to walk out.

Moreover, even if companies are aware that gender bias exists, they don’t think they are affected by it. Except that they are.

A 2012 study, cited by Sheryl Sandberg in her book, Lean In, found that when assessing identical CVs for a managerial lab position from a male and female, scientists of both sexes gave higher marks to the better applicant.

When women cannot advance in companies, they do not gain experience and expertise and are thus restricted from higher paying jobs.

If you are a manager, or hold a c-suite position, you can help your departments and teams understand this and not tolerate decision making and position advancements that are based on gender discrimination or bias.

I don’t know about you, but I can tell you that as a girl, I was raised with the wrong idea that I didn’t need to work and that I would be provided for.

In addition, in conversations that I’ve had with other women, they too have shared that they did not grow up with the idea that they should be paid for providing value.

These misleading concepts have given many women the idea that they don’t need to be paid well for jobs they enjoy, or that being girls, what should be important to them, is how much they help and not how much they earn.

The damage to their futures, is that women undermine how much value they bring to their positions, and how much they should be renumerated for it.

We need to work on ourselves to get rid of limiting beliefs when it comes to money. Further, we need to objectively be able to look at the market, and understand what value we bring. This is especially true as women entrepreneurs, who determine the level of their financial success. (This is actually true for everyone, men and women – that we each determine our own level of financial success, but it is easier to see when you work for yourself.)

Bear this in mind. Nobody will pay you an amount of money that you do not fully believe that you’re worth. If you want to smash the limiting beliefs you were raised with, work on your confidence and practice saying what you’d like to earn with conviction.

9. Enforcement, better laws, and the unjust society we live in

While there are laws that are supposed to protect women against sexual discrimination, it occurs each and every day in Israel’s Knesset. Sanctioned by the very body that legislated the laws in order to protect women, the Israeli Knesset, and the current government supports parties that discriminate against women from becoming a part of them.

This is an unacceptable position where women are not only prohibited from sharing their voice, but the lesson to the Israeli public is in fact that women are worth less. This idea is further reinforced in Rabbinic courts where women are subject to the whims of their husbands who must release them from their marriage before they can remarry, and which allow women to be extorted in exchange for their freedom.

But what does this have to do with being paid less?

The pay gap between men and women is a symptom of a larger problem. So long as an unjust  family structure exists, inequality will continue to prevail and so will gender pay gaps.

To paraphrase Pirke Avot (Ethics of the Fathers), while you may not be able to complete your work, you are not permitted to desist from it.

To make the world a better place we must work towards a more just and more equal society. We all have a tremendous amount to gain from this.

Each of us has different abilities and resources. We each have different life circumstances. It is up to each individual to decide what they can take upon themselves and where they can make a difference. So, go out there and make a difference to help narrow the gender gap. Not just for you, but for those after you.