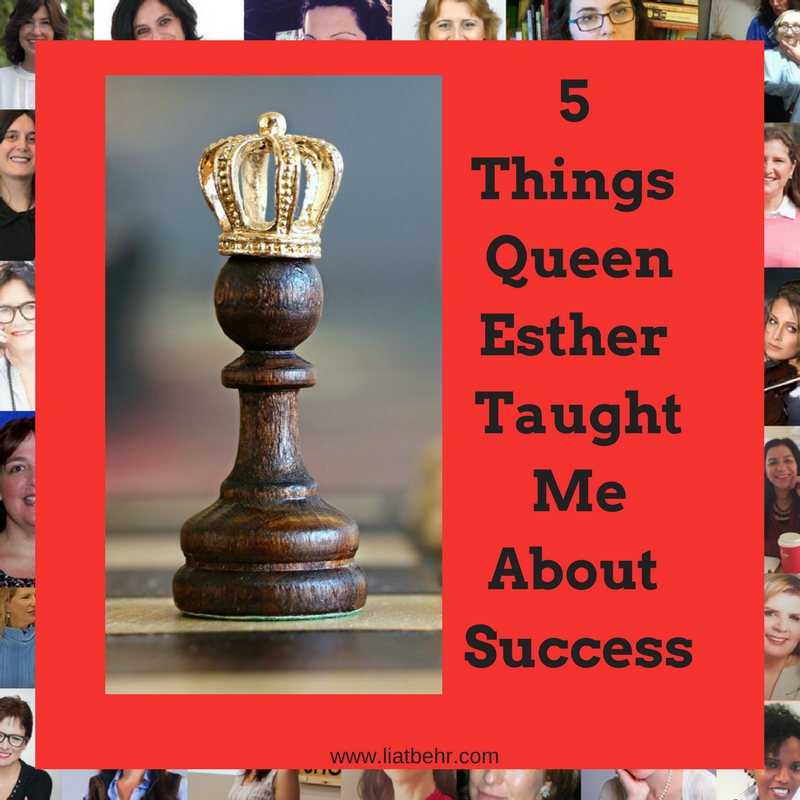 Today is the Jewish holiday of Purim, everywhere in the world, except Jerusalem, where it will be Purim tomorrow. As you know, I love being inspired by amazing women, successful women,and women who are making a difference. Today that has prompted me to write about Queen Esther. In this post, I share 5 things Queen Esther taught me about being a successful woman.

Mordechai and Esther are the heros of the Purim story, saving the Jewish people from the evil decree of the wicked Haman who wanted to decimate the existence of the Jewish people in one day – men, women and children. His plan was foiled, and he was hung on the very tree on which he had planned to hang Mordechai.

During the story, Esther, Mordechai’s niece, becomes queen and plays a strategic role in reversing the decree to which King Ahasuerus originally agreed to.

There are not a great number of women in the Tanakh who are public figures or who take initiative to do something great. When there is, it usually pays to look deeper.

When Mordechai discovered Haman’s plan to destroy the Jews, he enlists Esther’s help, asking her, rather commanding her, to go before the King and beg him on behalf of her people, to save them.

But Mordechai doesn’t tell her how to go about this. Perhaps he was not aware that one cannot simply come before the king without being summoned, even if that one is the queen.

It was Esther who devised the plan of how to actually carry out Mordechai’s demand.

It was her initiative to gather Shushan’s Jews and request of them to fast for three days, as a form of repentance in the face of the possible impending tragedy. It was also by her design that she initiated two feasts before making her request from the king.

My personal takeaway is that an idea with no plan is meaningless. A plan without the ability to take initiative will not bear fruit. Had Esther not carefully carved a strategic plan and taken the initiative to see it through, the story of Purim may have had a very different outcome.

Tied to Queen Esther’s initiative in gathering the Jews, is her faith in G-d who she entreats together with the Jewish people to support and protect her in her very dangerous endeavor – initiating a talk with the king without being summoned.

In Fear and Trembling Soren Kierkegaard unpacked the meaning of faith. His ideas are beautiful and very involved. But I’d love to share one of them:

“…it takes a paradoxical and humble courage to grasp the whole temporal realm now by virtue of the absurd, and this is the courage of faith.”

Courage is the ability to accept the future through actions that you take today. It is about taking your life into your own hands, about making decisions and acting on them, as well as taking responsibility for your choices.

Queen Esther acted courageously when she made the decision to gather Shushan’s Jews, fast and approach the king. She had courage to plan the feasts and her timing to make her requests. She further had courage to beg King Ahasuerus to save the Jews after Haman’s demise and make further requests.

Queen Esther was raised by her uncle Mordechai because she was orphan. We’re not given any details about what happened to her parents and the details are not necessary to understand the story. What is clear and vital is that Queen Esther, before she was queen, was mentored by her uncle. And once she was taken into the king’s palace, she continued to do as Mordechai advised (he’s the one that advised her not to reveal that she’s Jewish and he’s the one that commands her to go to the king and ask him to save the Jewish people).

I have found that there are many ways to be mentored. There are formal mentors and informal mentors. For me, it’s been about figuring out where I am and calling upon the mentors I need to succeed – whether formal or informal. I’ve gone so far as to set up a Mastermind group with other amazing women to help move things forward. These women have been instrumental in providing assistance, advice and confidence to help me move things forward.

Queen Esther’s actions on the the other hand were completely driven by her love and respect for her uncle, as well as her love of her people. Sure, when Mordechai demands of Queen Esther to go the king and beg him to save the Jews, Esther’s response is that it’s too risky and that she may be killed. She seems to require more than just a slight reminder from Mordechai of the implications she will bear if she refuses, but ultimately, the final the choice is hers and she chooses to let her values drive her actions.

The lesson of values driving action can pretty much be taken into any realm of our lives. To me, it means being my unique self and letting it show. Often, if I don’t know what to do in a certain situation, I will try to analyze the situation in terms of values – figure out which value is most important to me and then determine my course of action.

Wishing everyone who’s celebrating today or tomorrow a happy Purim!!!

5 Things Working in Hi-Tech Taught Me