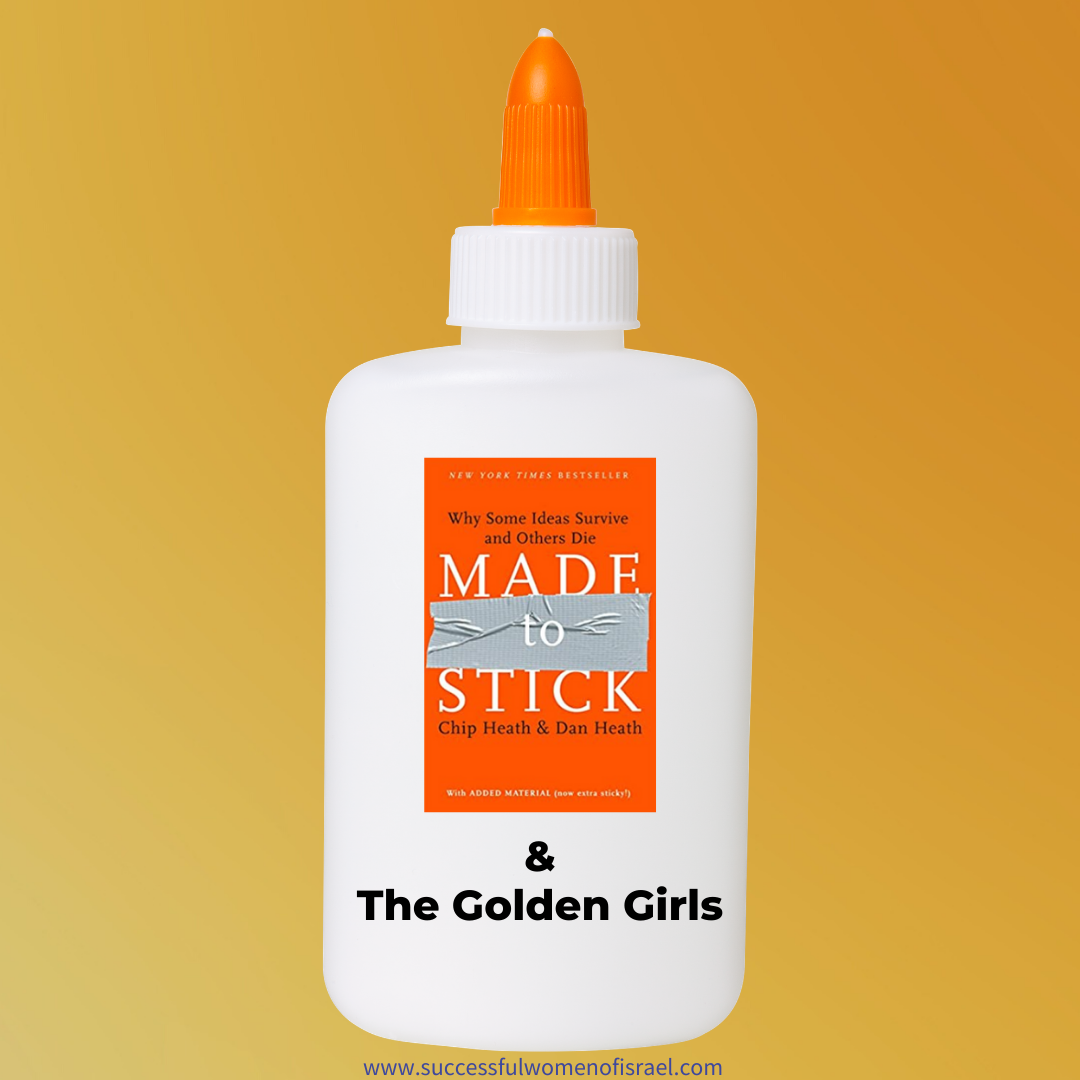 With Made to Stick, Chip Heath and Dan Heath wrote a brilliant book about communicating messages that are understood, remembered, and have long lasting impact to the point where they change ideas and even behavior.

Most ideas don’t stick. How can they? According to Forbes, the average American is bombarded with between 4,000 and 10,000 messages a day. In other words, you don’t have a chance of remembering even a small fraction of the messages you come across.

And yet, some messages and ideas get through. And not only do they get through, some of them even impact the way you think or how you act. It’s the secret behind these messages that the Heath brothers share in Made to Stick.

In this post, I’m going to share the six factors in Made to Stick that distinguish memorable ideas from ones that are forgotten even before you look away. And I’ll share examples of those sticky factors from one of my favourite shows ever, The Golden Girls.

“Simple,” explain the Heaths, means “finding the core of the idea.” It means stripping an idea down to the point where it can be stripped no more.

The Golden Girls is about four women who comfort and help each other, and hilariously criticize each other through the golden years of adulthood. At its core, stripped of all else, it is about friendship.

“Surprise gets our attention.”  Our human brains are extremely efficient and quick to adapt, and block out consistent patterns such as background noise. That’s why if we expect to grab attention (notice the word grab), we need to do something out of the ordinary, something that isn’t expected.

The Golden Girls is genius in this respect. We don’t expect mother and daughter to have such extreme differences in height: Dorthy Zbornak (Bea Arthur) was 5”10. Sophia Petrillo (Estelle Getty), 4”9.

We also don’t expect an old lady to have a mouth on her. And indeed Sophia Petrillo never lets us down with her snarky, perfectly-timed put-downs.

We also don’t expect mature women to be promiscuous (Blanche Devereaux) or so naïve, dare I say, dumb (Rose Nyland).

Golden Girls’ four lead characters unexpectedly break the stereotypes we have of older women, and force us to view them in a different light. The fact that this is done with immense humour and talent is something we are so completely unused to, that viewers instantly became hooked, turning The Golden Girls into a hit show with 25 million viewers.

Concrete, as in the opposite of abstract. Abstract ideas take time to understand and sink in. Concrete ideas are ideas we can easily picture in our mind, making them more memorable and thus stickier.

The Golden Girls characters are concrete and memorable. Each of them has a different look, wardrobe, different background and different tone and pace. These concrete elements make them so memorable, we can easily conjure their image in our mind.

So often we look for credible people through people who we already find credible – think about how you won’t hesitate to ask a trusted friend about a recommendation for a doctor or hair stylist.

So while credible sources may be doctors or consultants, they don’t always have to be (as in the example above).

Often we like and befriend someone for who they are, or what they’re doing and this is often enough to make them credible in our eyes.

The Golden Girls are no different. Once we’ve fallen in love with them, we’re able to not only to enjoy the laughs, but also listen to their lessons.

“For people to take action, they have to care.” Anyone who creates anything – a message, a product, a story, a video – knows, that if you want it to succeed you have to appeal to people’s emotions.

Emotions inspire us to act – whether it’s to purchase something, recycle, or give charity.

In this fabulous article titled “30 Years Later, ‘The Golden Girls’ is Still the Most Progressive Show on Television,” author Tracey Ross shares the deep ideas that appeal to our emotions and have influenced the way we think about certain subjects, including feminism, aging, and gay rights.

The Golden Girls is a comedy. But that never stopped it from tugging at our heartstrings in a lighthearted yet serious way.

Stories are powerful communication and education tools. Stories provide both knowledge and inspiration, and as such, they have the ability to teach important, powerful and memorable lessons.

Each week The Golden Girls told a story. Each week we laughed. And sometimes there were even powerful lessons to be learned from important values imparted.

Watching different situations and the way they unfold ultimately helps us when we find ourselves in similar situations. To paraphrase the Heath brothers: stories simulate our existence.

Interestingly, The Golden Girls appealed to so many age groups. I think it has something to do with the fact that the characters were so nuanced. There was a deep, perhaps even subconscious acceptance of others.

What sticky television show or advertisement have you recently encountered? What elements have made it stick in your mind?